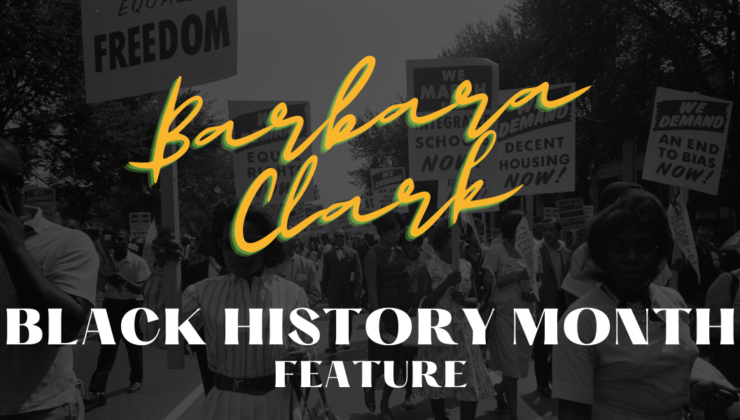 February 22, 2022 by Ashley Domm in In the Community
Guest Author: Todd Gray, Associate Director of Development

Barbara Clark is a native Washingtonian, born in a northwest neighborhood at home in the 1940s to a military father and working-class mother. Only two hospitals served Black people in northwest DC at that time, and her mother could not make it to either one.

“My first experience with racism was at the five-and-ten store’s lunch counter.”

Clark recalls how she and her mother were required to carry out their food while white patrons could dine in at Woolworth’s lunch counter in downtown DC. While that was her earliest memory, she also recollects growing up in segregated schools and how Black and white kids would go their separate ways during the school year after being allowed to play together over the summer in front of a local white-owned convenience store.

“Racism was both explicit and subtle back then. The Civil Rights Movement was just beginning.”

In the late 1950s, while employed at a Virginia drive-in restaurant, Clark remembers telling Black people they could not be served at the establishment and being asked to prep workstations for white employees, which was not part of her job. Towards the end of her shift one day, she refused to prep a white employee’s station in one such incident, which resulted in her quitting. In a later work experience with the federal government, she recalls how Black employees had to take tests to get hired while some white employees did not. She and other Black workers were also excluded from lunch outings with white colleagues.

“Blacks wanted more equality and took notice of what was happening; they wanted to change the social climate.”

In the 1970s, Clark witnessed a greater economic balance emerge in DC, as Blacks began to make more money and move into white-majority neighborhoods. As Black neighbors moved in, white residents moved out to more suburban areas in Virginia and Maryland. She recollects how important Black leadership was to the passage of Home Rule in 1973, which allowed DC residents to gain greater control of the city and elect its first mayor and city council.

“Ward 8 has become sort of a dumping ground and haven for slumlords.”

Clark recalls how ward eight has changed over the past 50 years. Once a thriving community with a local hardware store, grocery stores, car dealerships, and restaurants – some parts are now heavily under-resourced, underserved, and a site for those in power to easily take advantage of its residents.

“I want to continue to support change in DC. Everyone deserves a piece of the pie. There is not a one-fit solution for every ward.”

Clark sees race-based discrimination as a core social problem that persisted throughout her early life in DC. But she notes the city’s amazing transformation over the past several decades and the many opportunities now available to residents. She currently serves as a Ward 8 ANC Commissioner, helping to advance initiatives that support equity and improve outcomes for disadvantaged DC residents. Clark has a passion for supporting DC seniors, ensuring they have access to vital services to thrive, including close access to transportation, grocery stores, and medical care. She also has a keen interest in supporting actions that reduce increasing violence across the District.

“With food insecurity at an all-time high in the District, working with area businesses in the food industry is paramount to solving hunger through ...
Newsletter Signup