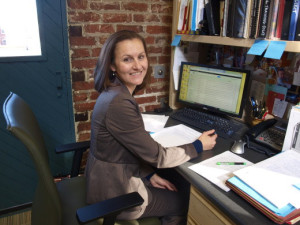 Over 70 people testified at the day-long hearing, including many immigrant community members and representatives from local organizations. Councilmember David Grosso, who introduced the bill, oversaw an energetic and passionate hearing. Attorneys like Allison testified about their frustration with seeing repeated violations of the law and inability to bring agencies into compliance under the current framework. And community members spoke of their struggles to communicate with their children’s schools and loss of important benefits as a result of agencies’ failure to provide language access. A large group of immigrant students spoke about their confusion and fear starting public school in D.C. with no language access coordinator or other assistance, including being unable to get lunch from the cafeteria and understand their class schedules. Councilmember Grosso ended the day on a high note, encouraging collaboration between himself, D.C. government agencies, and school officials to come up with an amendment that will actually work, not just a law on the books.

Today we share just a sample of Allison’s testimony.

Testimony of Allison Miles-Lee, Bread for the City

My name is Allison Miles-Lee, and I am a bilingual family law and public benefits attorney at Bread for the City. I’m also a member of the Executive Committee of the D.C. Language Access Coalition.

I’ve testified a number of times before this Council about language access problems my Spanish-speaking clients have faced at the Department of Human Services (DHS). DHS has often refused to provide Spanish interpretation to my clients, which has led to breakdowns in client-worker communication, resulting in denials or reductions in my clients’ food stamps, TANF and medical insurance benefits. My clients have also been barred from meeting face-to-face with a worker when there is no Spanish-speaking worker available, asked to return another week when a Spanish-speaking front-line worker is back from vacation. One client has regularly kept her son home from school to accompany her to DHS to interpret. In other cases, DHS workers have pulled in other customers, who are strangers, and in one case the service center janitor to interpret for my clients — gaining access to their personal information about income, address, and household composition. And a number of clients have continued to receive notices and other important correspondence from DHS in English, even after they should have been identified as Spanish speakers.

During the past two years I have filed seven language access complaints against DHS on behalf of Spanish-speakers. Five of those complaints have led to investigations by the D.C. Office of Human Rights (OHR) so far, and after every investigation, OHR found that DHS violated the Language Access Act by failing to provide interpretation or translated documents to my clients.

DHS’s continuing pattern of language access violations despite the recent string of OHR determinations – just in my cases, not to mention those that others have filed – shows that the current enforcement structure under the Act is not working.

The Language Access for Education Amendment Act would not impose new requirements on DHS to provide language access to its customers. What it would provide is two different enforcement mechanisms that would help ensure that DHS and other agencies follow the Language Access Act and face consequences if they do not.

We support the proposal to give OHR additional powers to issue fines against agencies that are found to have violated the Language Access Act, after a complaint and investigation. That will help ensure that agencies take complaints seriously and implement staff training and other preventative measures to make sure that customers do not suffer language access violations. Likewise, providing an explicit private right of action for complainants to sue in D.C. Superior Court when their language access rights are violated will give the Act more “teeth.” If a judge finds that an agency has violated the Language Access Act, he or she can order injunctive and compensatory relief. If an agency still fails to make required changes, a complainant will be backed with the power of the court order to bring the agency into compliance.

When the D.C. Council enacted the Language Access Act in 2004, it was welcomed as groundbreaking legislation that would ensure the rights of D.C.’s diverse community to access government services. The D.C. Council recognized that “access to District services is essential to the welfare and quality of life for many limited English proficien[t] residents.” However, as we’ve seen from the years the Act has been in effect, the desired outcome is not being met. Amending the Act to add a private right of action and to give OHR additional powers to hold agencies accountable will help ensure that the original goals of the D.C. Council in passing this important legislation are met, and that all individuals are able to access crucial DC government services.