Budget Training and Forums...#WeAreAllDC - Bread for the City

To help DC residents get vocal about what they wanted to see in the budget, our friends at the Fair Budget Coalition, started a social media campaign that included DC residents and service providers taking pictures with signs that depicted how they would 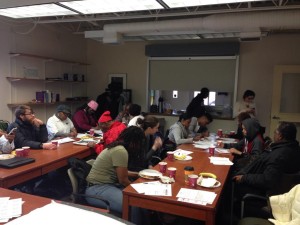 like to see the city spend those funds. Bread for the City teamed up with Fair Budget, So Others Might Eat (SOME), Academy of Hope, Southeast Ministries and Sasha Bruce Youthwork to host a pre-meeting on the day of the forum that was to be held at Anacostia High School.

What would the budget look like if it truly had low-income DC residents at heart? That is the question that community members came together and answered one the morning of February 21st, while fellowshipping over a delicious breakfast.

We honestly weren’t sure how many people were going to show. The snow that was supposed to start at 1:00pm decided to come at 10:00am instead. That didn’t stop over 15 residents from coming out that morning. People wanted change, and they were willing to do what it took to get the ball rolling—snow or no snow!

Monica Kamen from Fair Budget did a mini budget training so that we could all see how the money is currently spent. Then we talked about some of the things that people are tired of seeing in DC, and who they see suffering the most. Finally, I led the group in a visioning activity, where we thought boldly (and radically!) about what sort of DC we would like to live in, and what sorts of priorities it would take to achieve that vision. 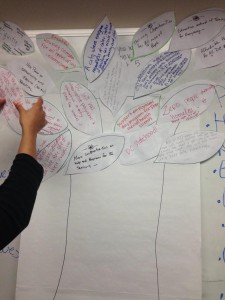 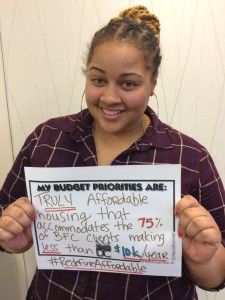 The end result was a beautiful tree that laid out the problems, the vision and the proposed solutions that could be addressed by the budget over the next four years.

Though the Budget Forum that was scheduled for that day was eventually canceled, residents were so geared up about the vision that they created, that we all tweeted Mayor Bowser to invite her to meet with the residents who had gathered at Bread. She was unfortunately, not able to make it.

We agreed to set a future date where residents could meet with one of her representatives directly to talk about their vision, and what things they would like to see in the budget.

The rescheduled Budget Forum was February 28th, and over 150 people turned out to tell Mayor Bowser what sorts of things—like truly affordable housing, adult education programs and more—they would like to see in the budget.