Chairman's Corner: Why Are We Here? - Bread for the City 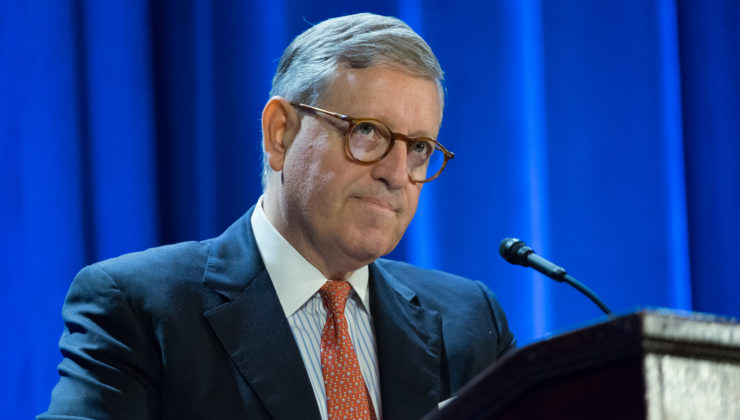 Chairman’s Corner: Why Are We Here?

Why Are We Here?

I’m not really asking the philosophical question. Each of us has grappled with that existential issue. My personal view is that the Bible gave us the best answers – to love your neighbor as yourself; to act justly, to love mercy, and to walk humbly with your God; to seek justice. And those directives are baked into Bread for the City’s DNA. Our motto, after all, is “Dignity, Respect, Service, and Justice.” It’s a motto that is our touchstone as we grapple with lending a helping hand to the tens of thousands who struggle daily with the burden of a low income.

Our food stamp system, which used to be sufficient to purchase minimal food for 28 days in the month, now – thanks to Congress – provides for 26 days a month. Where do those missing five days of food a month come from when you have no money? Well, from places like Bread for the City. We are the safety net. We provided food for that three-day gap, and now we provide the food for that five-day gap. Last year we gave food to over 27,000 people who had nowhere else to go – an increase of 10% over the year before. Of course, it comes at a cost to us – having to give five days of food instead three days cost us two-thirds more in food costs. And on top of this growth, the District changed its food stamp computer system – against the advice of the federal government – and now we see thousands of people without normal timely re-certification who have lost their food stamps altogether solely because of the computer failures. (Bread for the City is a named plaintiff in a suit against the District for this shocking example of mismanagement.) And as a predictable result, the number of people coming to us for emergency food assistance – as in “we have nothing in the house to eat, please help us” is up by 40%!

We also know, from a study by D.C. Hunger Solutions, that between 2014 and 2015, 27 percent of families with children in the District had periods when they were simply unable to afford food. Twenty-seven percent! How can we let that happen?

We are the richest country on earth and yet we still must confront this dire reality for too many of our neighbors. The median annual income in the District last year was one of the highest in the country – at $75,506. Yet once again there is enormous disparity between white and black. The median income for whites in the District was $125,747; for blacks it was a meager $37,891, less than a third. How can that be the product of a just and equitable society?

We know that this massive gap in wealth accumulation is the result of hundreds of years of institutional and economic racism – let’s call it by what it was. It was an intentional, systematic effort by white elites to disenfranchise, diminish, segregate, impoverish, limit and deny African-Americans. Unequal access to schooling, unequal schools, bank red-lining, unequal sentencing, unfair policing, and outright segregation are just some of the many techniques that our society used to diminish and oppress. Why should we be surprised that with all the cumulative disadvantages heaped on black Americans and all the advantages given to white Americans that there is so huge a gap in wealth?

So again, let’s ask the question, “Why are we here?” We are here because we are committed to helping our neighbors in need – giving them nutritious food, social services, legal advice and representation, medical and dental care, training, clothing, and assistance in finding housing. Last year we helped over 33,000 people in all of these areas. But that’s not all we are about. We are equally committed to combating racism in all its forms, and advocating for justice and racial equity in our society.

Our health professionals, our social workers, our lawyers, our community advocates and all the staff who work tirelessly to meet our motto of “Dignity, Respect, Service, Justice” do their work because they are committed to making our world a better place, to doing whatever we can to repair the dynamic that has short-changed so many, who now live with the burden of low incomes in a society teeming with wealth. Join us. Become a part of our 40 year crusade to help those who need help the most. This is why we are all here.

Hi, Lashonta. Thanks so much for visiting Bread for the City’s website. Just visit breadforthecity.org/volunteer to sign up to serve! While you’re in the website, you can also go to “Make an Impact” on the main menu, then “Volunteer” to access the page. Look for the “Sign Up for Your Shift” button to select a day and time. We appreciate your interest in volunteer service!