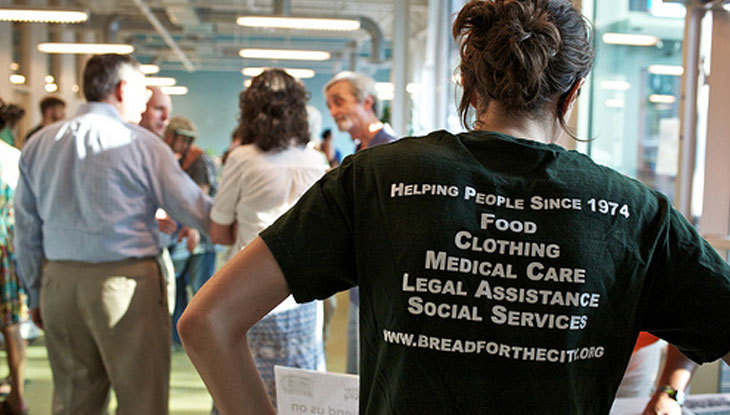 This is  a crosspost from Lonnie Powers, Executive Director of the Massachusetts Legal Assistance Corporation. We found it on billmoyers.com. This post first appeared on TalkPoverty.org.

Sargent Shriver, President Johnson’s personal choice to lead the War on Poverty, was once asked which anti-poverty program he considered the most important.

“My favorite is Head Start because it was my idea,” he answered. “But I am proudest of Legal Services because I recognized that it had the greatest potential for changing the system under which people’s lives were being exploited.”

Legal services, also known as civil legal aid, has indeed been a potent anti-poverty tool in two ways. First, through individual case work that enables poor people to gain access to the rights and benefits from state and federal service agencies, health care providers, and schools to which they are entitled. Second, through large, class-action lawsuits and advocacy efforts that change laws and governmental policies that adversely ― and overwhelmingly ― affect poor people.

With the 50th anniversary of the War on Poverty in 2014, we have been treated to numerous assessments of the effectiveness of Johnson’s (and Shriver’s) program these past 12 months. It is indisputable that tremendous progress has been made and that much work remains.

To continue progress, civil legal aid must be deployed more broadly in future efforts to combat poverty, and public resources for legal assistance must be increased greatly.

With regard to class action lawsuits, we have seen how civil legal aid has resulted in significant legal victories. In 1970, legal aid attorneys successfully argued before the US Supreme Court in Goldberg v. Kelly that state welfare departments cannot terminate benefits without first providing applicants with a fair hearing. In 1973, California Rural Legal Assistance successfully sued to stop large agricultural operators from requiring migrant farm workers to use short-handled hoes while working in fields. (The short-handled hoes forced workers to stay bent over for long periods of time; field managers required their use because if they saw workers standing up, then they knew that they were resting and not working. After these hoes were banned, back injuries among farm workers dropped by more than 30 percent.) More recently, a federal lawsuit by Greater Boston Legal Services resulted in changes in policy by the Massachusetts Department of Transitional Assistance which had improperly denied benefits to people living with disabilities.

A look at how civil legal aid case work for individuals struggling with homelessness and/or unstable housing, as well as those who are victims of intimate partner violence, is also instructive.

Numerous programs around the country demonstrate that civil legal services can help poor people keep their housing, or negotiate exits from housing that prevent immediate evictions, and ensure a smooth transition to safe, affordable housing. A pilot program launched in 2009 by the Boston Bar Association showed conclusively that poor people fighting eviction notices in housing court in Quincy, Massachusetts, fared much better when they were represented by attorneys. Two-thirds of those with full representation kept their housing; only one-third of those who went through housing court without an attorney were able to do the same. Similar results have been found in New York City, San Francisco, and San Mateo County in California.

Meanwhile, a landmark 2003 study published in Contemporary Economic Policy showed that legal services is one of the most effective ways to help women living in poverty escape intimate partner violence. Amy Farmer and Jill Tiefenthaler, researchers at the Carnegie Mellon Census Research Data Center, were intrigued by a Department of Justice report noting that rates of domestic violence had significantly declined during the 1990s. They analyzed data from the National Crime Victimization Survey and the Census to tease out the reasons for the improvement. Their conclusion? Access to civil legal services ensured delivery of protective orders; assistance with child custody and support; and divorce and property distribution that victims needed to begin rebuilding their lives. Civil legal assistance was also critical for resolution of domestic violence-related legal disputes around immigration, housing, and public benefits.

While services provided by emergency shelters, counselors and hotlines are vital in the short-term, Farmer and Tiefenthaler wrote, services provided by civil legal aid “appear to actually present women with real, long-term alternatives to their relationships.” (It is also interesting to note that between 1994 and 2000, the period during which incidents of domestic violence declined, the availability of civil legal services for victims of domestic violence increased 245 percent — from 336 such programs to 1,441).

Despite these clear successes, many people do not understand what civil legal aid is, and surveys regularly find that most Americans erroneously believe that poor people have a right to free counsel in civil cases. Meanwhile, state and federal funding for legal assistance is well below what it needs to be.

This fall, the Boston Bar Association’s Statewide Task Force to Expand Civil Legal Aid in Massachusetts released Investing in Justice, a report showing that more than 60 percent of those who are eligible for civil legal aid in Massachusetts and seek services are turned away due to lack of resources. (Full disclosure: I am a member of the task force.) The Task Force proposed that the Commonwealth’s investment in civil legal aid be increased by $30 million over the next three years to begin to address the unmet need. Currently, the state invests $15 million annually in civil legal aid.

The irony, of course, is that the civil legal aid yields a measurable ― and significant ― return on investment. Looking at work solely related to housing, public benefits and domestic violence, three independent economic consulting firms which did analyses for the Task Force found that every dollar spent on civil legal aid in eviction and foreclosure cases saved the state $2.69 on services associated with housing needs such as “emergency shelter, health care, foster care, and law enforcement.” Every dollar spent assisting qualified people to receive federal benefits brings in $5 to the state. Every dollar spent on civil legal aid related to domestic violence is offset by a dollar in medical costs averted due to fewer incidents of assault.

This summer, Philadelphia resident Tianna Gaines-Turner became the first person actually living in poverty to testify before Congressman Paul Ryan’s congressional hearings on the War on Poverty. In her strong and moving testimony she spoke of the need for increased state and federal funding to end poverty, saying, “People living in poverty ― those who were born into it, and those who are down on their luck ― want to get out of poverty. We want to create our own safety nets, so we never have to depend on government assistance again.”

Civil legal aid is a powerful tool. It helps people living in poverty build a foundation of stability so they can create a better future for themselves, their families, and our communities.

You can learn more about the Massachusetts Legal Assistance Corporation on their website: http://www.mlac.org/.

Bread for the City’s Legal Clinic is funded, in part, through private and public dollars awarded by the DC Bar Foundation. You too can support civil legal services for DC residents in need here.