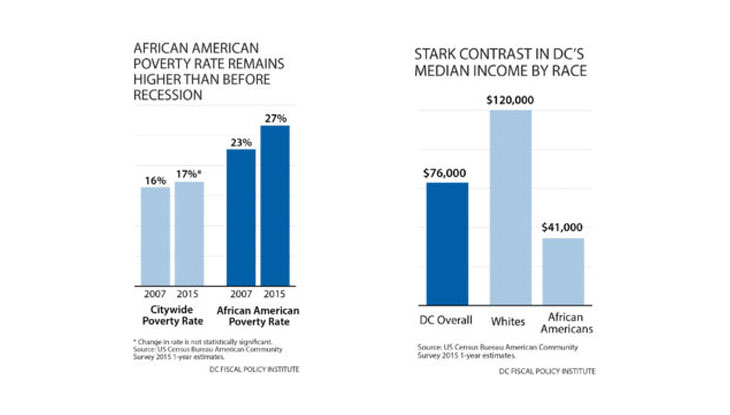 “As our friends at the DC Fiscal Policy Institute remind us, there is still much work to do to create an equitable and just city for all DC residents.”
-George A. Jones, CEO Bread for the City

Extracted from a letter written by Ed Lazere, Executive Director of DC Fiscal Policy Institute, the passage below highlights the widening racial inequality in Washington, DC even as the city undergoes substantial economic growth in this post-recession period. Take a quick read… 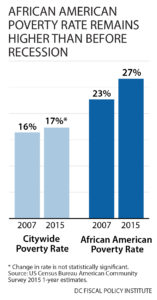 An economic recovery is supposed to help more and more people the longer it lasts —  but that’s not happening in DC. Our economy has been rebounding since 2010, and median income has risen sharply following a nationwide trend. Yet this growth has not reduced poverty. Over 110,000 DC residents lived in poverty in 2015, according to new Census figures — that’s 18,500 more than in 2007.

The District’s Black residents are bearing the brunt of the city’s unbalanced recovery. The median income of Black DC households has not grown since 2007 and stood at just $41,000 last year – one third of the typical white household income. Black DC residents are the only racial or ethnic group to face a higher poverty rate today than before the Great Recession, with 27 percent living on less than $24,000 for a family of four.

These findings underscore that communities of color in our city suffer from a lack of opportunity to create a better life for themselves and their families. 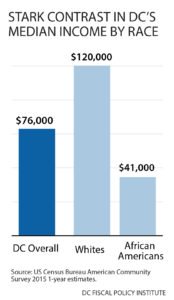 Amidst this troubling news, there is evidence that the social safety net can have a positive impact. The share of District residents who lack health insurance fell for the second year in a row, and about 17,000 more residents had health coverage in 2015 than in 2013. This progress is thanks to Medicaid and affordable health plans offered through DC Health Link.

Our success as a city depends on opportunity for everyone. The failure to achieve that will leave us with even wider racial and economic inequality and a less stable community. However, the success of programs like Medicaid and DC Health Link proves that we have the tools to level the playing field and expand economic opportunity.

You can read DCFPI’s full analysis of the new Census income and poverty figures here.