This post was written by Taylor Healy*. Taylor is the Community Lawyering Project Supervisor with Bread for the City. 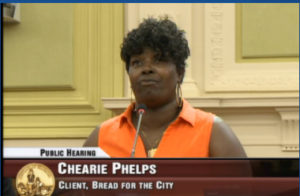 Councilmembers McDuffie and Bonds introduced the housing version of the bill back in April 2016. The Council then held a hearing in July where Bread organizer, Chearie Phelps-El, and 4 Bread client leaders testified in support of the bill. After months of advocacy efforts by a coalition of organizations including Bread for the City, the Washington Legal Clinic for the Homeless, the Legal Aid Society of DC, Legal Counsel for the Elderly, the ACLU of the National Capital Area, and the DC Coalition Against Domestic Violence, DC now has one of – if not THE – most progressive laws in the country reducing housing discrimination against people of color who have already experienced discrimination at the hands of the criminal justice system.

Specifically, the bill will open up housing opportunities for people with criminal records – moving people out of homelessness and into housing much more quickly. The bill:

We want to thank Councilmember Kenyon McDuffie for his strong leadership on this bill and Councilmember Bonds for co-introducing and supporting the progression of the bill. Staff members of the Judiciary Committee (Chanell Autrey, Jontae Clapp and Kate Mitchell) also deserve special recognition for working so collaboratively with the community to improve the bill. Another huge win towards increasing access to affordable housing!

*BFC’s Community Lawyering work is made possible in part through public and private funds awarded by the DC Bar Foundation.*