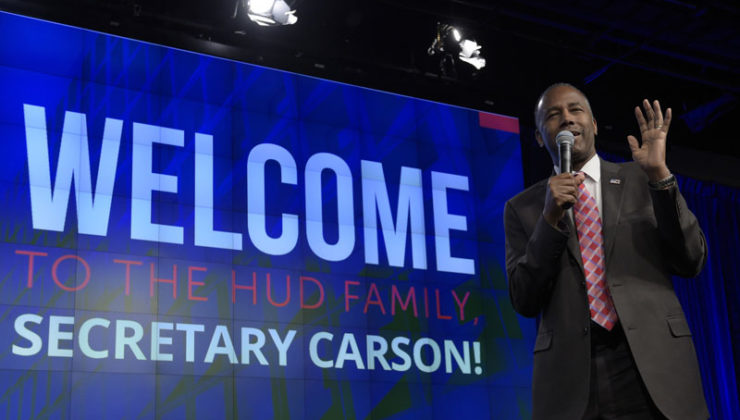 Disinvestment from HUD will have catastrophic effects on DC

April 06, 2017 by Chris Sabbatini in Advocacy Affordable Housing In the Community

The Trump administration is aiming to cut Housing and Urban Development’s (HUD) budget by $6 billion, or 13%. This massive disinvestment from low-income housing and neighborhoods – the steepest housing cuts since the Reagan administration – would exacerbate dangerous housing conditions and homelessness in DC and around the country. While these proposed cuts are dire, Trump did not start this trend – as of last year, HUD funding had already fallen $4.6 billion, or 8.7%, since 2010.

Trump’s proposed budget threatens to accelerate a familiar cycle of preordained failure: government massively disinvests from public housing, declares it a failure (usually blaming that failure on tenants and/or public systems in general), and names the solution as further disinvestment and/or privatization of public housing.

Public housing capital funds from the federal government are already bare bones, and Trump appears to be planning to cut them by $1.3 billion, about 32%. DC could lose $19 million in vital funds used to operate and repair public housing. As part of that loss, capital funds for the DC Housing Authority (DCHA) would shrink from $14.3 million to $4.5 million.

That money is used to pay off old debt, and it’s possible DCHA would have to eliminate vouchers in order to make up those debt repayment funds – on top of voucher losses from voucher funds directly cut by HUD.

DC funds vouchers for about 4,000 families and individuals, which allow them to pay a third of their income toward rent, with the city covering the rest: a crucial, though underfunded piece of the affordable housing puzzle. DC could lose 1,000 vouchers, unless it replaces the federal funding with additional local funding.

Additionally, the draft budget threatens to cut direct rental assistance by $300 million, along with a total of $221 million that would be cut from assistance programs for seniors, people with disabilities, and Native Americans.

“This budget proposal deserves an F,” wrote former HUD Secretary Julián Castro. “It would benefit the wealthy and military contractors at the expense of America’s middle class and the poor. By cutting funds for housing opportunity, this budget would drive up homelessness for veterans, families and young people. Congress should reject it.”

Trump is spending $3 million per weekend traveling to his golf resort in Florida, and wants to move $54 billion from civilian expenditures to military, despite the US already spending more on its military than China, Russia, Saudi Arabia, the United Kingdom, France, India, and Germany – combined.

Washingtonians simply cannot afford a massive cut to housing subsidies. Public housing serves over 7,000 of DC’s lowest income families, and is likely the last support system between many and homelessness. Last year, about 8,400 DC residents were experiencing homelessness, a 14% increase from the previous year. About 70% of DC’s public housing residents are living on poverty-level fixed incomes or government assistance, including Social Security, Supplemental Security Income (SSI), pensions, or Temporary Assistance for Needy Families (TANF). Most of the rest are working one or two jobs; yet would not be able to live in DC without public housing.

Tenants pay 30% of their household income toward rent; the average rent for a public housing tenant is $255/month, impossible to find in the DC area’s private housing market. Meanwhile, there is still a 40,000-household waitlist for housing vouchers at the DC Housing Authority.

Due to decades of disinvestment, living conditions in public housing are dangerous for many residents. Common problems include mold, rodents, holes in ceilings and walls, leaky pipes, and dysfunctional heating and cooling, and generally poor construction with shoddy materials. Stories of ceilings falling in on tenants are common, and many units have a noticeable humidity.

Meanwhile more than half of public housing families are headed by seniors and/or persons with disabilities. More than a third of the households have children. Many public housing tenants with dangerous living conditions understandably refuse to pay rent as the conditions remain unrepaired. When DCHA submits an application to HUD to get permission to demolish a property, they must declare that the property is unsuitable for housing. Yet we know that on properties like Barry Farm, Lincoln Heights, and Kenilworth Courts, tenants living with deplorable conditions are being evicted for non-payment of rent.

This is unjust, and why we are demanding that DCHA waive rental arrears for all properties where the Authority has admitted to unsuitability by virtue of submitting an application for demolition and disposition.

Stay tuned for part two of this look into the effects HUD budget cuts would have on Washington, DC.