Inside BFC's Southeast Household Preservation Project - Bread for the City 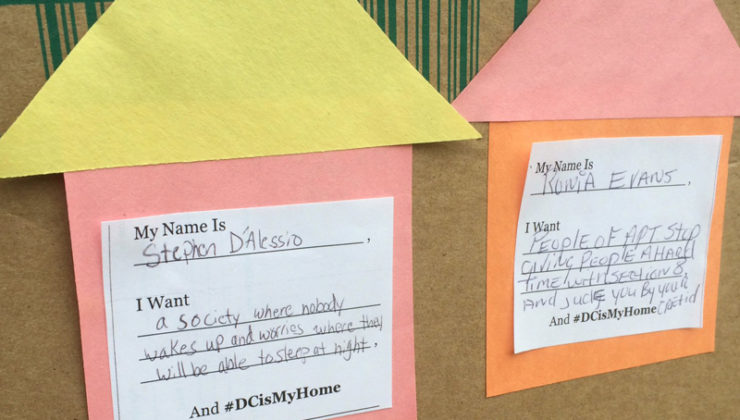 Since its launch in 2010, Bread for the City’s Southeast Household Preservation Project (SHPP), has helped DC residents in the neglected Ward 7 and Ward 8 neighborhoods. Residents from the predominantly Black/African American neighborhoods have difficulty maintaining stable housing due to issues that can include lack of income, education, job skills, sustained employment and/or child care, a disability or mental illness. SHPP case managers protect families from homelessness and the sudden uprooting of lives due to eviction and prevent homelessness by identifying and addressing the root causes of a household’s instability. Today we share with you one of SHPP’s success stories:

In 2014, a domestic violence situation forced Sharon* and her children out of their home.  Since then, Sharon and her five children have been staying with various friends and family. For three years, they haven’t had a home to call their own.

Sharon is self-employed and has her own company that sells natural beauty products – she works hard, but without a roof over her head, she found it harder and harder to travel to events and sell her products. Between the Temporary Assistance for Needy Families (TANF) benefits that she began receiving and her small business income, Sharon could make it through the month: but it was still not enough income to afford housing in the District.

But recently, things have begun to turn around – and SHPP has been part of the solution. In May of 2004, Sharon had placed her name on the DC Housing Authority Section 8 Voucher Program and Public Housing waitlist. Finally, thirteen years later in May 2017, she was moved to the top of the list. But you can’t just move into the unit: the process of documenting every member of your family and applying formally for public housing is arduous. That’s where SHPP came in: Sharon worked with me, her case manager, to obtain the necessary documentations for all six family members; notarize them; and deliver them to the DC Housing Authority with her completed application.

After being approved, the DC Housing Authority first offered Sharon a unit that was not actually available. Then she was brought to a unit that made Sharon feel unsafe. Throughout this process SHPP provided encouragement, support and transportation assistance until Sharon was shown a six-bedroom unit, with a small yard that she fell in love with. After 13 years of waiting, she again has a home of her own, where her entire family can be comfortable.

Sharon is still waiting on the final inspection of the unit but hopes to move in within the next couple of months. She is keeping it a secret from her youngest children until she has the keys in hand, but cannot wait to break the news that they finally have a new home of their own.

*Name has been changed to protect the client’s privacy.