Language Access: More work to be done! - Bread for the City

Last year, I blogged about an important bill that Councilmember David Grosso introduced – the Language Access for Education Amendment Act. This bill proposes to amend the DC Language Access Act of 2004 to allow for DC government agencies to be fined if they fail to provide language access.

The DC Language Access Act of 2004 was groundbreaking legislation that was intended to ensure the rights of DC’s diverse community to access government services. This law already requires DC government agencies to provide interpretation–in all languages–for limited and non-English proficient (LEP/NEP) individuals that seek to access services, and in some cases government agencies must provide written translations as well.

This is an important law for LEP/NEP Bread for the City clients. It means that a French speaking mother has the right to an interpreter during a special education meeting at her son’s DC Public School. A Spanish speaking family has a right to receive a notice in Spanish from the Department of Human Services letting them know that they need to come in for a meeting in order for their medical insurance to continue. And an Amharic speaker has the right to an interpreter when he is picked up by the Metropolitan Police Department and charged with a crime. If this law did not exist, many Bread for the City clients and other DC residents and visitors would struggle to access basic government services. 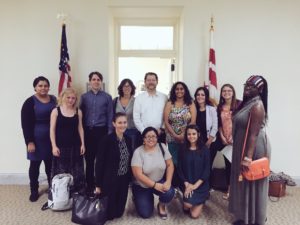 As good as the Language Access Act of 2004 is on paper, in the more than ten years it has been in existence it has become clear that it needs strengthening. The current law lacks “teeth.”

Under the law, if someone claims that a DC government agency failed to provide language access to an LEP/NEP individual, the DC Office of Human Rights (OHR) conducts an investigation. If OHR finds that the agency has violated the law, it tells the agency to take “corrective actions” and makes a written finding of non-compliance. But agencies have no obligation to follow OHR’s corrective actions, and the finding of non-compliance has no financial or other impact on the agency.

As a result, DC government agencies simply ignore the law in many instances. One government agency, the Department of Human Services (DHS) has continued to violate the law over and over in spite of multiple findings of non-compliance by OHR.

In response, one year ago, a group of attorneys (with Bread for the City “of counsel”) filed a DC Human Rights Act Class Action lawsuit against DHS on behalf of LEP/NEP individuals who were denied language access. Just last week, I met with another Spanish-speaker at Bread for the City whose food stamps were terminated after DHS failed to provide an interpreter when she went in to re-certify.

The Language Access for Education Amendment Act would not impose new requirements on DHS or other DC government agencies to provide language access. However, under the bill, OHR would order DC government agencies to pay a fine of between $1,000 and $5,000 for each finding of non-compliance with the law. The complainant will get to keep half of the money, and half will go to a fund to promote language access in DC government. If agencies continue to violate the law in the same manner, they may face doubled fines.

This fine structure is exactly the “teeth” that the existing law needs in order to make DC government agencies take note and come into compliance.

It is crucial that the bill be set for a vote this year so that it does not die out. We urge you to contact your Councilmembers to let them know that our LEP/NEP community members deserve a language access law that is actually enforceable!

The work of Allison Miles-Lee and Bread for the City’s Legal Clinic is funded in part through private and public dollars awarded by the DC Bar Foundation.