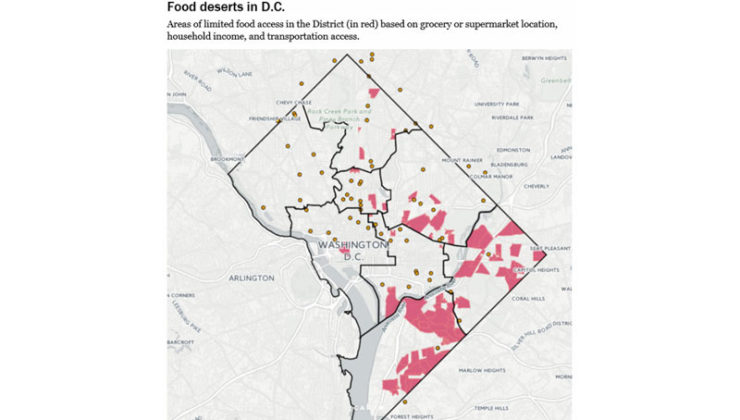 March 17, 2017 by BFC in Food Access Food Justice In the Community

Below is an excerpt from an article posted at DCist.com on Food Deserts in the District of Columbia. The article is based on a report released recently by the DC Policy Center. Read full article here.

A D.C. Policy Center report released Monday provides a current look at D.C.’s food deserts, taking into account more than just how many grocery stores are in a certain area. The report’s author, Randy Smith, points out that food access in the city is “deeply connected to both poverty and transportation.”

Smith found that about 11.3 percent of the city’s area is considered a food desert. While most studies only factor in proximity to grocery stores, he defines food deserts as places where residents have to walk more than 0.5 miles to get to a grocery store or supermarket, over 40 percent of households have no vehicle available, and the median household income is less than 185 percent of the federal poverty level for a family of four.

He collected data from the Census Bureau’s American Community Survey and D.C. Open Data, among other sources.

The results are still similar to other experts who’ve said Washingtonians who live east of the Anacostia River hunger for more healthy food (and food delivery) options. According to Smith’s findings, more than three-quarters of food deserts in D.C. are located in Wards 7 and 8. By area, the majority (46 percent) of all food deserts are located in Ward 8.

So it’s no surprise that food deserts are concentrated in Anacostia, Barry Farms, and Mayfair, according to the report. But it also names Ward 5’s Ivy City as an area with a high concentration of food deserts, despite the rapidly developing neighborhood welcoming a MOM’s Organic Market more than two years ago. 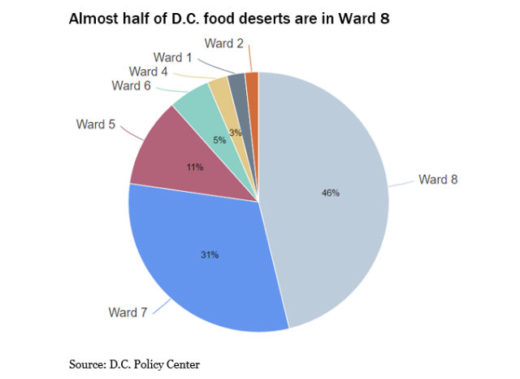