A couple years ago, Mr. Jordan’s doctor told him he needed to quit his job as a floor technician because the strain on his heart was too much. Mr. Jordan could not afford to give up his livelihood, so he kept on working for almost a year before coming to Bread for the City for help applying for Social Security disability. We secured his benefits in just over two months—quickly by Social Security standards—but Mr. Jordan still had to spend most of his savings account to cover rent and other expenses while his claim was pending.

Social Security Disability Insurance has a five month waiting period. Mr. Jordan could receive Supplemental Security Income for those months, but to meet the $2,000 resource limit and bridge the gap between a $733 benefit and $905 in rent, Mr. Jordan had to withdraw money from his modest retirement account.

He applied for subsidized housing units through our Housing Assistance Project, so now he is waiting for his name to be called along with the tens of thousands of others on the DCHA waiting list and the lists for site-based section eight housing.

With a $1,052 benefit and $905 rent, Mr. Jordan is just barely keeping his head above water. If Congress does not act soon to preserve the benefits Mr. Jordan earned through decades of employment, he might drown.

When I wrote last week about the ways Social Security re-distributes money from people of color to white Americans, I considered the overall Title II picture and did not distinguish between old age benefits and disability benefits. If we were only looking at old age benefits, the redistribution would be even more severe, as shown by this graph in the same article from the Urban Institute: 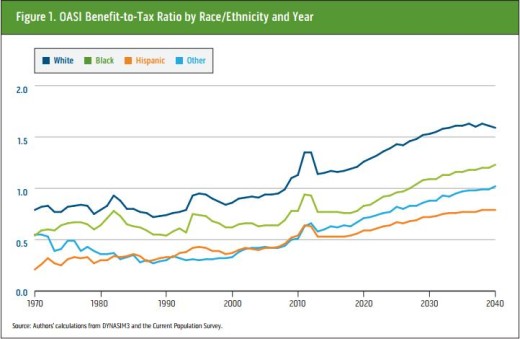 However, if we only looked at disability benefits, we would see a very different picture: 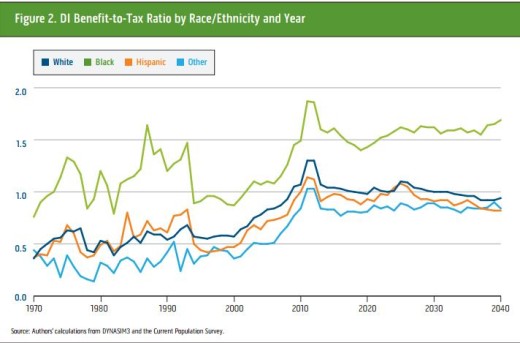 In this case, redistribution favors African-Americans. This is largely attributable to racial disparities in education and health that contribute to a person’s employment prospects. SSA implicitly operates on a “social” model of disability, which Rhodes Scholar Rachel Kolb defines as arguing “that an individual becomes ‘disabled’ within the constraints of a specific physical environment or social convention, not solely as a result of the static properties of the body.”

Getting to the root causes of racial disparities in health, education, and vocational achievement is beyond the scope of this blog post, but I will take a brief stab and hope people will continue the conversation.

I hope you’ll consider unequal access to primary and preventive medical care that can control diseases before they become disabling and that you’ll also consider that African-Americans were almost twice as likely as non-Hispanic white American to be uninsured in 2010 (the Affordable Care Act is starting to change this).

I hope you’ll consider that people of color are more likely to work dangerous and physically-taxing blue collar jobs that leave them susceptible to disability, and that this includes older Americans who make up a large portion of the disabled workers. 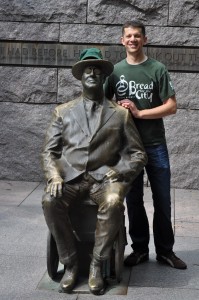 Let’s also not forget that for equally qualified job candidates, “whites with a felony conviction fared just as well, if not better, than a black applicant with a clean background.” And if you won’t consider these factors because you know too many poor people of other races suffering from these same cruel policies and inequities, I hope you’ll consider the role racism plays in upholding the systems that hurt poor and working people of all colors.

This is all to say that Social Security Disability Insurance is very important to African-Americans and one of the places where Social Security is most beneficial to that group. So when Social Security faces some cash flow problems, guess which program is on the chopping block?

Before we get to the obvious answer, let me digress to tell you a little bit about my personal finances.

I have two bank accounts. At each semi-monthly pay period, $450 goes to my Chase account to cover rent and utilities (I have roommates). The rest goes to a PNC account where I split money for saving and spending. I’m not going to win a Nobel Prize in Economics for this plan, but it works well enough for me and the people to whom I pay my bills. If my monthly expenses changed, I would ask my wonderful colleagues in Human Resources to change my direct deposit amounts so that I had the right amount in each account. Simple, right?

It is so simple in fact, that Congress has managed to do something similar eleven different times under both Democratic and Republican leadership as discussed in an excellent article from the Center On Budget and Policy Priorities. The 6.2% of our paychecks that finances Social Security benefits is split up between trust funds dedicated to paying Old Age and Survivors Insurance and Disability Insurance. At various times one trust fund or the other has run low, and Congress has either raised the payroll tax or simply shifted the amount of the payroll tax going into the depleted trust fund. 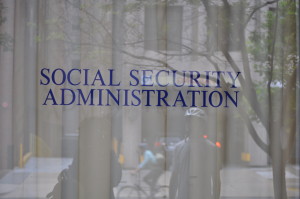 Demographic and economic factors necessitate adjustment from time to time. In 1994, when legislation was last passed to change the distribution between the two funds, the actuaries predicted that a new reallocation would be necessary around 2015 or 2016.

What the actuaries did not predict was the toxic political climate of our time. In an unprecedented move, Republicans voted to amend the House Rules to prevent a clean reallocation. They decided to use the need for reallocation as a bargaining chip for “reforms” they would like to see in the program, and have taken Social Security Disability Insurance beneficiaries hostage in a showdown with House Democrats. If reallocation does not occur before the trust fund is further depleted, benefits will be cut 19%.

Let’s get back to Mr. Jordan. If his SSDI benefit drops 19%—the outcome if Congress cannot find a way to solve a manufactured crisis—his income will be lower than his rent. That, for the uninitiated, is one way someone becomes homeless. This Social Security benefit is not a handout, but rather an insurance program that Mr. Jordan has paid into for years. He insured himself against retirement and disability, and we—we who elected this Congress, we who are blessed with health that enables us to work, we who draw on old age benefits no politician would dream of stealing—are threatening not to hold up our end of the covenant.

Social Security has some serious problems about its long term solvency and its efficacy that need to be solved. As in most negotiations, some concessions will be needed on all sides. These discussions might be tough, but we know how to have tough conversations.

What we can’t do is bargain when one side is holding a gun to the other’s head. And if you think that’s an exaggeration, I’ll buy you a front row seat to Mr. Jordan’s eviction.