The Cost of Giving… - Bread for the City 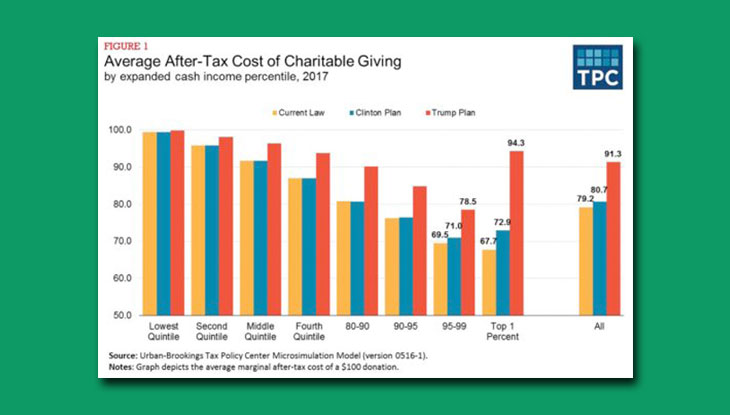 The Cost of Giving…

Our guest author for this post is BFC Board member, Craig Stevens.

As we prepare for the new presidential administration, Sam Cooke’s foresight rings true: “A Change is Gonna Come”.

Some of the changes the administration is likely to make could impact charitable giving incentives in a big way. As a Bread for the City Board Member and a partner in Aronson LLC’s Nonprofit and Association Industry Services Group, I have an idea: Give today!

Under Mr. Trump’s tax plan, charitable giving may fall in 2017 by at least 4.5 percent and by as much as 9 percent, that’s about $13.5 billion-$26.1 billion. As a result, many families are front-loading their charitable giving plans, according to Robert Frank of CNBC’s Inside Wealth.

If you expect to make a monetary donation to Bread for the City in 2017, you might consider taking advantage of the current after-tax incentives and increase your giving before year’s end.

Here are the details:

Bread for the City hopes the incoming administration will deliver on its poverty-fighting promises. In the meantime, as supporters of this organization, there are steps we can take to ensure that Bread for the City can continue serving its clients. Step 1? Donate more in 2016.

Of course, matters like this are uncertain and much can change. However, if there is an increase in after tax cost of giving in 2017, you wouldn’t want to have missed the opportunity to have given in 2016.

Thank you for helping us do what we do!