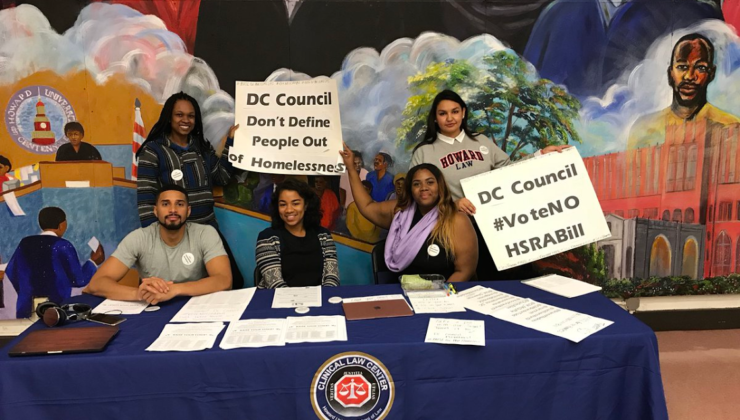 Sanctuary is defined by Merriam-Webster as “a place of refuge and protection.” The District lauds itself as a sanctuary city–which on a very basic level means that it is one of several cities across the United States that has pledged to have limited cooperation with the federal government’s enforcement of immigration laws. This is critically important, particularly as so many of our undocumented neighbors continue to be actively targeted by xenophobic laws. But as I consider the city’s over-investment in the carceral system ($700M in FY17), underinvestment in affordable housing ($234M in 2017), the decision that families experiencing homelessness do not deserve the dignity of private bathrooms, and most recently, last week’s vote regarding proposed changes to the Homeless Services Reform Act (HSRA), I cannot help but find this status of sanctuary city rings hollow for thousands of District residents–certainly for the nearly 34,000 DC residents Bread for the City sees each year.

It is no secret that DC, like many major cities in the US, is in the midst of an affordability crisis marked by the widespread decimation of Black, Chinese and Latino/x neighborhoods. Study after study has warned the District of the tangible costs and racist consequences of continuing in this vein of underinvestment in affordable housing while also failing to address an ever-growing wage and income gap. And yet, as we see record numbers of homeless families–inclusive of homeless children–we also see District representatives too frequently voting in favor of measures that at the best, do not help those struggling the most, and at worst, actively harm them. The HSRA changes proposed by the local administration are an example of the latter.

Bread for the City and more than 30 other local and national organizations signed onto a letter calling for the Council to vote “no” on the HSRA bill.

While the director of the Interagency Council on Homelessness may think that Bread for the City and other organizations who signed on “don’t provide homeless services” that would be considered within the continuum of care and “don’t have in-depth knowledge of systems,” we have in fact been serving clients in the continuum of care for longer than the term has existed.  We don’t believe in creating barriers to people getting help (which is why we led this campaign to get food banks to stop requiring referrals). Our experience as service providers and our clients’ voiced experiences with this broken system inform our position that increasing barriers to accessing homeless services, particularly in the midst of a widely-documented affordability crisis, is both unconscionable and unjust. The Council may have unanimously passed the Sense of the Council on Race, Equity and Social Justice Resolution of 2017, but last week’s votes call into question the veracity of the council’s newly-professed commitment to creating a racially just DC.

So what exactly went down last week?

A lot happened at Tuesday’s legislative meeting (pro tip: skip around by clicking on the “index”). There were honors bestowed upon Ernest Green of the Little Rock 9 and the (very cool) girls of the DC Force, the only girls baseball team in the region. A few bills were introduced by Councilmembers, including one from Councilmember Silverman aimed at addressing slumlords and another from Councilmember Bonds that attempts to close a loophole in the rent control law. Then the Council voted to dispose of the old Franklin School Shelter as “surplus” (apparently in the middle of a housing and homelessness crisis, the city determined there was no public use for the building).

But the day took a turn toward the absurd when we entered the “non-consent” portion of the agenda (the part of the agenda that houses items that still warrant discussion because they’re controversial or Council can’t reach consensus). The two items on the agenda were the Union Market Tax Increment Financing Act of 2017 (Bill 22-382), and the Homeless Services Reform Amendment Act of 2017 (Bill 22-293). The Union Market Tax Increment Financing Act of 2017 gives an additional $36 million to a developer who, to date, has already gotten $46 million in public funding and tax incentives from the government. $36 million in additional funds to do what, you ask? A parking lot. DC Fiscal Policy Institute had come out warning the city against making the $82 million subsidy, calling it “a giveaway”–and that’s exactly what it was. Citing the affordable housing crisis, Councilmember Silverman introduced an amendment that would give the $36 million to the developer for the express purposes of increasing the number of affordable units on the site (they’re only doing the bare minimum required by the law) and for public transportation improvements in the area. She read from a report from DC Department of Transportation (DDOT) and a report from the Office of Planning (OP), where both agencies affirmed that there is actually no need for additional parking in that area beyond the 1,000 parking spaces that are already planned. Despite these reports and a lively debate about Councilmember Silverman’s amendment, every Councilmember except Silverman still voted to pass the $36 million developer giveaway.

And because life is funny (in the “laugh to keep from crying” kind of way), the very next conversation was about whether or not the city should increase barriers to accessing homeless services in order to save money. Chairman Mendelson was first to introduce an amendment about the presumption of safe housing. This language, originally offered by the Mayor, was one of the key reasons Councilmembers T. White, R. White and Grosso originally blocked this bill from exiting committee.The amendment gives the Mayor the power to re-determine whether or not someone is even eligible for shelter. This determination can only be overridden if the individual or family is able to  “provide credible evidence, that it is impossible to return to [their] housing.” The Administration believes that there are people who have other safe places to go who are lying to get into a shelter. Normally a position taken by moderates and members of the GOP, the racist belief that Black people and other people of color living on low incomes abuse the system is the basis upon which too many funding decisions are made. And as if being built on problematic ideologies is not enough, the amendment’s standard of”credible evidence” is unclear. It was so unclear, that Councilmembers went back-and-forth on the dais about what “credible” even meant. Councilmember and constitutional lawyer Mary Cheh had to step in and offer some clarification, further illustrating the dangers of having a standard that requires providers to interpret vague standards while trying to determine whether someone can access services. Unfortunately, the amendment passed with Councilmembers Cheh, Evans, McDuffie, Nadeau, Todd, Allen and Bonds all voting in favor of the amendment.

Next Grosso attempted to move two amendments. The first, passed unanimously, exempts survivors of domestic violence and sex trafficking from needing to prove residency. The second, which created a catch-all that would allow other documents to be accepted as proofs of residency so long as the person is residing in the District of Columbia voluntarily and permanently. Grosso said that the purpose of the amendment was to, in the midst of the city really narrowing the door into homeless services, broaden the list of proofs in the hopes of making accessing homeless services less burdensome. This amendment had no fiscal impact (meaning it wouldn’t cost the city any more money than it already spends on homeless services). Even still, Councilmember Nadeau advised her colleagues to vote against it. In a letter many of you may have gotten from the Councilmember, Nadeau states she voted against this amendment because she wanted to ensure “that our precious resources go ONLY to District residents.” It seems that only applies to people living on low incomes, as her “yes” vote for a $36M parking subsidy was awarded to developers including national developer Edens (who’s “DC office” isn’t even in DC). The second amendment was not passed, with only Councilmember Grosso voting in favor.

The final HSRA amendment introduced that afternoon was from Councilmember Trayon White, which would have granted a one-time six-month extension of rapid re-housing subsidies based on three criteria: 1) Whether the family had been assessed and referred to other housing options; 2) whether they got adequate case management, and; 3) Whether they are able to sustain the housing independently. Only if a participant did not meet those three criteria at the end of 12 months would they be eligible for an additional 6 months. Arbitrary time limits do not help people. Our attorneys see the consequences of the program’s failures almost daily, as Rapid Rehousing clients often find themselves facing eviction when they are unable to sustain the market-rate rent at the end of their subsidy. The Washington Legal Clinic for the Homeless did a report on some of the problems with the rapid rehousing program, one of which is the arbitrary 12-month cliff. While 18 months is far from the permanent income-based subsidy that many of the Rapid Rehousing participants actually need, it is a step toward acknowledging that the 12-month cliff–even in what is supposed to be a temporary program–is just too short. In a city that boasts one of the most expensive rental markets in the country where you need to make $83,104 just to live “comfortably,” it is no wonder people exiting shelter are unable to sustain market-rate rent after 12 months. Several Councilmembers spoke in favor of supporting the amendment, with Councilmember Nadeau being the first to speak against the amendment. In her remarks, she said she “understood [her colleagues’] compassion, but at some point, we have to draw the line.” The irony of needing to “draw the line” when deciding on funds to improve a homeless services program but not when it comes to $82 million developer giveaways is not lost on us. When it came time to vote, Councilmembers T. White, McDuffie, Gray, Silverman, R. White, and Grosso all voted in favor of the amendment. Despite her earlier pledge from the dais to support T. White’s amendment, Councilmember Bonds stated on the record “I’ve been asked to vote ‘no.’” When asked to clarify her vote, she said: “I vote no.” She tweeted this statement to clarify her vote, saying she was asked to change it, and that she looked forward to working with both T. White and Nadeau between the first and second vote.

At last, it was time to take the first vote on the entire bill, with the amendments (the good and the bad). Despite the debate, the last minute addition giving the Mayor more power and a failure to pass an amendment that would have made an improvement to Rapid Rehousing for families, the final vote was 11 – 2. Only Councilmembers Trayon White and Grosso voted “no” on this bill.

This isn’t about good or bad people. This is about making the right or wrong decisions. This is about elected officials being accountable to the people they serve. Labels like “progressive” or even “sanctuary city” mean little if as people are dying on the street homeless, their representatives are making it more difficult to access services while doing too little to address the underlying need for housing people can afford. Councilmembers have an opportunity to do something between now and the second vote on this bill to eliminate harm. Until and unless this bill is fixed, we stand firmly with the 30+ other organizations who call on DC Council to #VoteNoHSRA