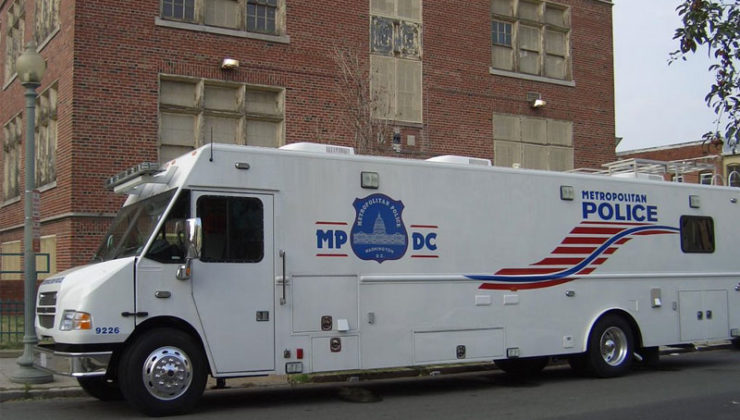 This post was written by Erin Shields. Erin is a Community Organizer with Bread for the City’s Community Lawyering Project.

In the midst of a housing, homelessness and displacement crisis, the DC government is spending about three times as much on jails and policing as it is spending on housing. Bread for the City organizers and community members demand the council prioritize funding for affordable housing in the city.

In response to more than $60 million proposed by Councilmember Vincent Gray for increased Metropolitan Police Department salaries, Bread for the City amplifies community members’ demand that the DC Council rethink what true public safety means in the District.

Recent studies show that access to immediate, permanent, low-barrier supportive housing is associated with decreased time in jail, as well as reduced use of emergency medical services. Numerous studies show that homelessness increases the likelihood of recidivism. When people have access to basic needs such as housing and jobs, crime rates fall and our city becomes safer.

Out of a $13 billion FY17 budget, DC is spending $235 million of local funds on affordable housing, compared to approximately $700 million on jailing and police programs, infrastructure and staff. Though Mayor Bowser’s commitment of $235 million is more than her predecessors have spent on housing, it still is not nearly enough to stem the housing crisis for tens of thousands of DC residents in communities of color, and certainly not enough to make good on Bowser’s promise to end chronic homelessness.

Ultimately, we must begin to consider the government’s investments not on the basis of what has been done in the past, but rather, we must demand investments that move us closer to meeting the actual need–a number closer to $5 billion. Homelessness is killing people. The People for Fairness Coalition has held vigil for nearly 100 homeless individuals who have died on the street. It is not enough for this Council to simply invest more than previous administrations. A billion dollar crisis will require annual investments of hundreds of millions of dollars. The District government needs a plan that will get it to the point of making the necessary investments in deeply affordable housing, and spending $63 million on incarceration and policing does not move the city any closer to its goal of housing all of its residents.

Last Fall, residents facing homelessness or housing instability and their supporters, rallied to demand greater support from Mayor Muriel Bowser’s FY2018 DC budget. The residents spoke out about their negative experiences with incarceration and housing struggles, and decried a city budget that puts three times more money into jails and police than affordable housing. They called on the mayor to put more money into housing – vouchers, construction and preservation – than she puts into jails and police. How the government spends our money is a good way to tell what their priorities are – what does DC’s budget tell us? They aren’t invested in our futures; they’re invested in our incarceration.

Bread for the City amplifies community members’ demand that the DC’s Council rethink what true public safety means in the District. Safety is dignified housing, access to preventative healthcare, jobs with living wages, and access to healthy food. Bread for the City community leaders call on the DC Council to treat affordable housing with an urgency matching the intensity of the housing crisis in people’s everyday lives.