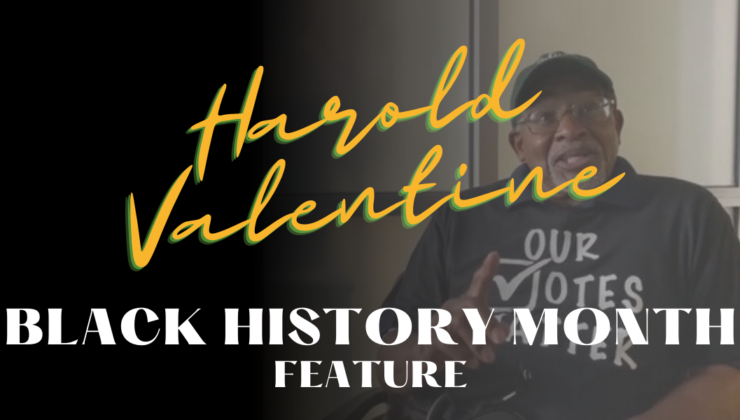 February 28, 2022 by Ashley Domm in In the Community
Guest Author: Todd Gray, Associate Director of Development

“I could not believe this was the Nation’s Capital.”

Harold Valentine, a native of Newport News, Virginia, arrived in the Shaw neighborhood of DC in 1977, seeing rundown houses, vacant properties, and storefronts raddled with drug activity. Valentine was astonished that the Nation’s Capital looked like this in the late 1970s; he remembers noticing how the concentration of churches amongst so much devastation was interesting.

“My first venture into community activism in DC was in 1979.”

Valentine moved to Columbia Heights in 1979 and embarked on his first community action effort, establishing the Tenant Housing Cooperative at the Kennesaw Apartments. It was the first Hispanic Tenant Association formed in the District, operating under the First Right of Refusal Law passed by the City Council in 1976. Valentine’s second project, an effort to address the crime and beautification issues in the community, was done by establishing the ANC1A Block Clubs Association.

“We brought fresh fruits and vegetables to DC families in need.”

In those early years as a DC resident, Valentine worked on a project to source fresh produce weekly from farms in Virginia and Maryland for needy families in Shaw. The project, spearheaded by the United Planning Organization, was referred to as “gleaning” – a term we still use today.

“I worked to reduce crime and drug distribution in Shaw.”

As illicit drug activity became more robust in the 1980s, Valentine worked to reduce illegal drug distribution in DC. He remembers fifteen to twenty people would stand by the telephone and “call in and out” their drug sales from the phone booths every day. In partnership with Shaw community organizations, Valentine led an effort to remove telephone booths in Shaw, one tactic to disrupt crime and violence. Directly after the project’s success, the Shaw community organized a march on crime and drug abuse.

“It takes a community to spur change in DC.”

Valentine collaborated with several Shaw community organizations, assisting residents with resources to purchase homes throughout the District. He also participated in negotiations with Abe Pollin for the erection of the MCI (Capital One) arena and the Walter Washington Convention Center.

“Homeownership is important and a human right.”

In collaboration with the Shaw community, Councilmember Jack Evans, and ANC1E Chairperson Norma Davis – Valentine helped launch the Shaw Anti-Crime Task Force and the Shaw Fund, focusing on economic development, safety, and housing. The effort aimed to secure homeownership opportunities for first-time homebuyers and unhoused DC residents. The group advocated for the DC government to fully fund the Housing Production Trust Fund to increase homeownership in the Greater Shaw Community. $150 million was allocated to this fund in the city’s last budgetary cycle to support widespread homeownership opportunities for underserved DC residents, a huge win for this grassroots effort.