Washington, D.C. residents who plan on volunteering at their neighborhood non-profit might want to ask to see their harassment policy first.

An Unacceptable Justice Gap: The Legal Services Corporation and its Fight for Civil Legal Aid

Every DC resident deserves access to quality legal representation to improve their lives, protect their families, and strengthen their communities.

Roughly 75 District residents rallied outside D.C. General Family Shelter on a rainy Saturday, Oct. 1, to demand that Mayor Muriel Bowser prioritize spending for affordable housing over policing and jails in next year’s budget.

Bowser Says $100 Million For Affordable Housing is ‘Historic.’ But Is It Enough?

Speaking at a groundbreaking last week, D.C. Mayor Muriel Bowser drew cheers from the crowd when she made a big announcement: During the 2016 fiscal year, which ended in September, the city had spent $106 million on affordable housing.

To say that Prophets of Rage is political doesn’t quite cover it. When reporters or pundits — from ABC to Bill Maher to Rolling Stone — call this combination of musicians from Cypress Hill (1988), Rage Against the Machine (RATM – 1991) and Public Enemy (PE – 1982) a “supergroup,” guitarist Tom Morello is quick to counter them. “We’re an elite task force of revolutionary musicians determined to confront this mountain of election year bull****,” he says.

CEO George A. Jones speaks about what Armin meant to Bread for the City

Bread for the City: Helping People Live and Thrive in a Changing D.C.

The D.C. Bar Pro Bono Center is leading an effort to explore how gentrification in the District of Columbia is affecting nonprofit organizations serving the city's neighborhoods.

DC Scene: Bread for the City

Crazy busy time of year! In addition to everything else going on, we went to three great galas last weekend. On Saturday night we headed to the Omni Shoreham in Woodley Park for Bread for the City Good Hope Gala. 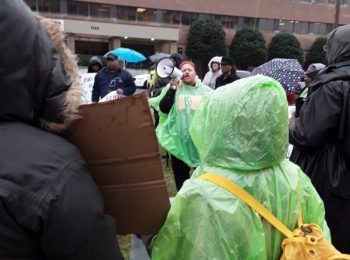 Bread for the City's Advocacy team helped public housing residents and advocates take their demands to the doorstep of the D.C. Housing Authority, dem...