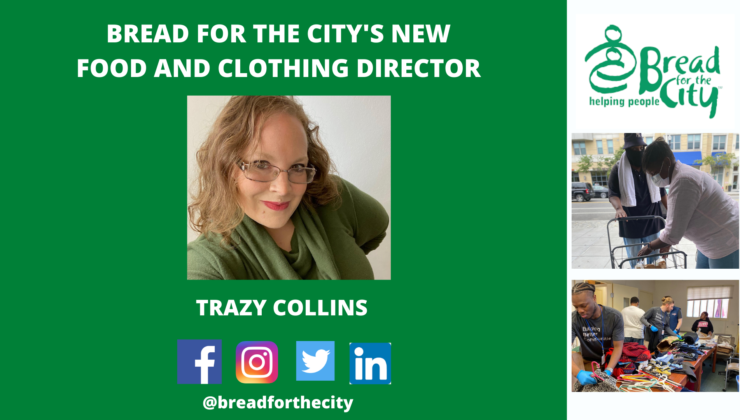 Bread for the City announces new Food and Clothing Director

Bread for the City is excited to announce Trazy Collins as our new Food and Clothing Director. She’s originally from Michigan, but most recently from New York City. Trazy has a Bachelor of Arts from Grand Valley State University in Spanish Language and Literature with a minor in Music and a Master of Global Development and Social Justice from St John’s University’s Rome campus. Trazy worked in a church as a youth minister for eight years and also did extensive work in Hungary, where she worked to fix racial disparities amongst Hungarians and Romani people (the largest ethnic minority in Hungary). She moved back to the United States and worked as the Program Director for Food and Nutrition for a nonprofit organization in New York City for six years. I had the opportunity to speak with her about Bread for the City and how excited she is to take on a new role.

What do you like most about Bread for the City?

TC: To be honest, it was the fact that this organization is just driven towards racial equity. It’s something I am very passionate about and it solidified my vision of working for Bread for the City.

What is your take on racial disparities that take place in Washington DC and in the country?

TC: I believe if we can fix and solve racism then we can solve food insecurity and solve the unequal distribution of resources including food within our country and around the world. The United Nations has said several times that the amount of food in the world is enough to feed the world. If we could distribute more equitably, then everyone would eat. If we can end racism then we can fix the unequal food distribution. That means ending food deserts in communities of color and expanding programs that are meant to lift people up instead of taking away dollars every chance we get.

What’s the atmosphere been like at Bread for the City so far?

TC: Welcoming and exciting! I don’t feel like an outsider and everyone has worked so well to bring me in and get me connected. I feel like I have been working here for a while.

How important is the Food and Clothing Department for low-income communities in DC?

TC: It’s a very important part of their lives and this goes beyond the food and clothes, it’s the community. It’s the fact that under normal circumstances when they come and get a bag of food or clothes, they are seeing people who love them and care for them without any strings attached. They have a sense of community within Bread for the City’s staff and volunteers. I think the food and the clothes prevent them from having to decide on whether they feed their children or keep the lights on. They don’t have to make those decisions because of what Bread for the City is providing for them. To be a part of that mission and service is humbling.

How excited are you?

TC: I am so excited. I told my staff that I am impressed with the work they’ve done for the last nine months. We saw a lot of food pantries having to shut down across the country because they weren’t able to continue their services. Bread for the City stepped in and stepped up and has been a powerhouse in DC. I am excited to join the team.