A Call to Action: Building Neighborhoods that Work - Bread for the City 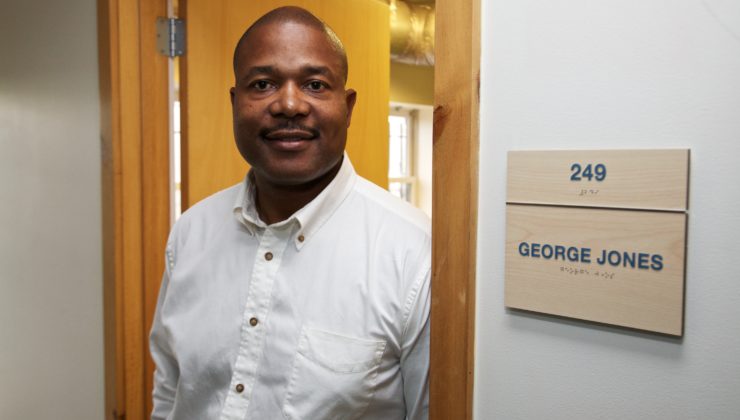 A Call to Action: Building Neighborhoods that Work

Last week, Bread for the City was awarded a $200,000 grant, courtesy of Bank of America’s Neighborhood Builders. Our CEO, George Jones accepted on our behalf and issued a call to action to everyone in the District: It’s time to build neighborhoods that work. Here’s what he had to say:

The greatest thing about being the CEO of Bread for the City is that I so often have the honor and privilege to accept awards like the Bank of America Neighborhood Builders award Bread is officially receiving tonight. When we learned that we had won this prestigious and much coveted grant award, we were so thrilled and proud. On behalf of the Bread Board, staff and community members we serve, thank you to Bank of America and the committee of volunteers and staff who selected our agency to receive the $200,000 general support grant and the yearlong leadership training and support that is a part of the award.

For over 40 years, Bread for the City has sought to assist and support our DC neighbors who live on low and sometimes no income. Over that same time, and increasingly we have sought to improve and reform our agency, and advocate for city wide public reforms that are key to providing our neighbors, almost exclusively people of color, with equitable access to resources that would in fact build economically strong neighborhoods, families and individuals.

While accepting the Nobel Peace prize in 1964, Dr. Martin Luther King said in his speech that there is nothing new about poverty, but what is new is that we have the resources to end poverty.

I thought a lot about Dr. King’s speech after I learned we’d receive this award. I believe that Dr. King’s assertion that we have the resources to end poverty is more true in Washington, DC than ever before. In DC, and the surrounding metro area there is not only enough wealth to end poverty, but we have the technology and brain power to completely break the cycle of poverty in the next 20 to 25 years.

Yes, I believe we have the resources, technology and smarts, but to end poverty in DC it will require courage and political will.  The courage and will to fund and build 50 to 80,000 units of quality affordable housing, to reform the workforce and economic programs to ensure that families living in poverty have an income that comes much closer to a living income, we need to reinvent our schools so that they are equitably resourced and become welcoming and affirming for all children, especially children of color.

Abraham Maslow, in 1943 outlined a hierarchy of needs that we all have. Maslow’s hierarchy of needs started with physiological and safety needs – those needs include food, shelter, financial security and health and well-being. When people, especially children are assured of those basic needs they have a true opportunity to reach their full potential, or as Maslow would put it to self-actualize.   When they don’t children often experience a kind of trauma that threatens their ability to survive, or live stable lives and most importantly to thrive in our city and our country.

So in closing, Bread for the City will use this grant to build programs that work. AND we accept this Bank of America Neighborhood Builders award as an official call to action to help end poverty in DC, by building neighborhoods that work.