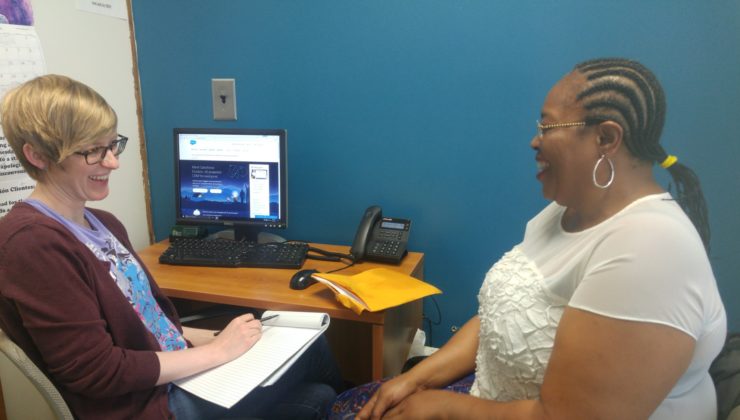 An award, sometimes called a distinction, is something given to a recipient as a token of recognition of excellence in a certain field. On Thursday, October 1st, Amy Gellatly, Supervising Attorney at Bread for the City, was recognized for her incredible work in the community.  American University Washington College of Law presented Gellatly with the Peter M. Cicchino Award for Outstanding Advocacy in the Public Interest. The award is given to students and alumni dedicated to the public interest that exemplifies the highest ideals of the Washington College of Law.

Amy is part of the Legal Clinic’s  Housing Law team which helps tenants in landlord-tenant and subsidized housing cases. She’s also a part of the Community Lawyering Team, which uses lawyering skills to go beyond defending people in court. The Community Lawyering team works with community groups and organized groups of tenants to help hold landlords accountable and to advocate for tenant rights. This work is essential to our community, 90-95% of landlords are represented by an attorney and only 5-10% of tenants have an attorney by their side.

In Amy’s acceptance remarks she shared her perspective of housing in our communities opining that “overall the point of the system is that people with enough capital to invest in property have a right to make money off of that investment, and those without capital are stuck confronting the impossible math of skyrocketing rents and stagnating wages. We see the same results play out over and over, tenants can’t pay the rent, face the violence of eviction and displacement, and try to start the process over again somewhere else.

According to Amy “during the pandemic, the fight for affordable housing is more important now than ever. We know that a lot of people can’t pay rent and they’re not going to have that money when the pandemic is over.” One of the things Amy loves about her job is that she gets to be a part of different conservations about changing the system and getting the people in power to acknowledge that housing is a human right. People do not deserve to be displaced due to market forces beyond their own control.

Amy says she is grateful to have a job as a lawyer where she’s able to help the underserved communities and advocate for housing rights.

Amy states that she believes she has “learned a lot at Bread for the City about what it means to be an organization that is rooted in the neighborhoods we serve. We’re not here to just push people through the lines, it’s about making sure everyone’s voice is heard. That is something I believe is different about Bread for the City compared to other nonprofit organizations.”

In Amy’s speech she says that she hopes “as a lawyer, and particularly as a public interest lawyer, my efforts will, in some small way, support the work of movements, enacting my hope for a world with less oppression means rethinking my relationship to my clients. For me to actively practice believing in a world with more justice, I have the opportunity, in every interaction with my clients to consider: how can I affirm this person’s humanity, how can I resist the false notion of lawyer as “expert,” and instead, really listen to what they’re trying to explain to me about what’s wrong” Amy aims to uplift her client’s idea of what justice should look like at every opportunity. And when their idea of what justice looks like can’t fit neatly into the legal framework she hopes to do her best to pick and chip away at that system little by little.

Gellatly has been a legal services attorney in the District since her graduation from American University’s Washington College of Law. She received her undergraduate degree in International Global Studies at the University of North Carolina at Chapel Hill.