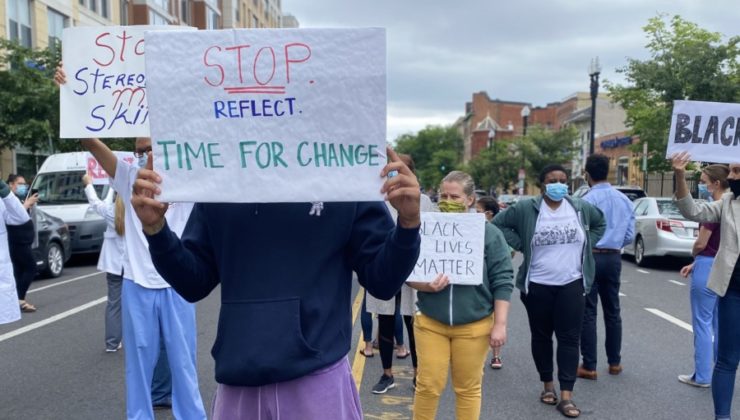 The following is the testimony of Advocacy Director Aja Taylor on behalf of Bread for the City at the DC Council’s Committee of the Judiciary & Public Safety’s budget oversight hearing regarding the DC Metropolitan Police Department FY 2021 budget, given on June 15, 2020.

Good morning. My name is Aja Taylor, and I’m offering testimony on behalf of Bread for the City on the Metropolitan Police Department’s (“MPD”) 2021 Budget. In order to achieve a truly racially equitable and just city, we must defund MPD and fund community solutions that replace the irredeemable institution of policing.

Today’s police can trace their roots back to early 1800s slave patrols – deputized white men empowered by the state to control the movement of Black persons and enforce the private property rights of white elites. Every subsequent generation, the police remained focused on the protection of property rights over the protection of communities. There is no way to separate the alleged protect-and-serve function of police from the racist context in which policing was born and in which it continues to thrive at the expense of especially Black communities and other communities of color. MPD has continued the legacy of terrorizing Black and brown people, administering racial segregation, upholding white supremacy, and enforcing the cruel economic order that deprives poor and working-class people of the livelihoods they deserve. The time for reform is over. The time for funneling more and more of our money into the hands of police – whether it be for recruiting and hiring more police, training police, or providing police with equipment like body cameras – is over. Now is the time to put public safety in the public’s hands.

People ask, what will we do about violent crime? What will we do about domestic violence? Right now, we approach these problems with the blunt instrument of policing and incarceration. We try to create bright lines between those who cause harm and those who are harmed. Instead of building and restoring social cohesion, we send police into the neighborhoods of our most marginalized residents to engage in violence in response to violence. One of the greatest harms the institution of policing causes to our communities is that it tries to persuade us that we do not have the skills, tools, and knowledge to address the problems that occur between and among us. A transformative approach to public safety recognizes those skills, and seeks to repair and prevent harm, rather than merely disappearing and inflicting further violence on Black people. A transformative approach recognizes that strategies to prevent and repair harm must come from within, and we have a vision for that transformation.

As an organization, we want to spend less time tending to the harm, trauma, and loss caused by the police and we want to spend more time implementing programs that support Black, brown, and poor residents of D.C. so that they may heal and flourish.

Defunding the MPD has to be done with the purpose of abolition, not with the intention to find alternative ways to regulate, punish, and oppress Black and brown people. We cannot use this money to substitute one form of oppression for another, and we especially cannot use it to paper over the purpose of police by implementing reforms in an inherently flawed and unnecessary institution.

Public safety and justice means community control; it means healthcare, education, good jobs, food justice, safe and secure housing, disability justice, and – yes – justice for those who’ve experienced violence and harm and even for those who have caused it. What does this mean to Bread for the City? Where do we see our communities doing safety and security every day, and how can we support them?

If Bread for the City can speak to any greater theme in this conversation about funding public safety, that theme is the resilience and creativity of the poor, of Black people in D.C., of public housing residents, of our migrant communities. Despite disinvestment and the tearing apart of communities through displacement and policing, D.C. residents come together to help one another in non-hierarchical ways that repair and prevent harm instead of adding to it. They advocate for tenants’ rights, education rights, welfare rights, and food justice. In times of a global health crisis, they organize and mobilize to develop mutual aid networks where institutions fail to provide what is needed. Policing will not solve the social problems our communities face because policing is a social problem. It takes control away from communities and puts it in the hands of strangers with guns. We need to reallocate power to those whose lives and livelihoods are actually at stake.

The Council’s job right now is to listen because we know what works and what community power and public control are capable of achieving. It must listen to its constituents who are in the streets crying out for a transformative approach to community safety and security. The pain and suffering of racist oppression at the hands of the government must end. The Council must listen, and then act. We are in a unique moment in this city and nation. We cannot squander this opportunity. We must be bold, root ourselves in our shared vision of a nurturing city committed to ensuring ALL residents thrive, and take real action to end the criminalization of Black people and people of color.