Finding My Voice Despite the Pain - Bread for the City

Finding My Voice Despite the Pain 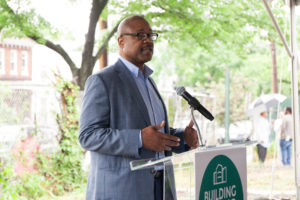 I must confess that over the past week I have struggled mightily with my own personal grief caused by the murder of George Floyd. I finally forced myself to watch the video, as I have been aware that the video as described to me would likely trigger even more pain than I was already feeling. Pain and trauma caused by flashbacks to images of the murders of Trayvon Martin, Michael Brown, Eric Garner, Tamir Rice, Freddie Gray, Philando Castille, Korryn Gaines, Marqueese Alston, Tony McDade, and the death of Sandra Bland, and all of the others killed because their Black lives didn’t matter enough.

As a leader at Bread for the City, the community has every right to expect me to use my voice and my position to speak forcefully about the racism and criminality of lynching filmed and now witnessed by millions of people in the United States and throughout the world. As a Black man, George Floyd’s murder feels deeply personal to me. It is easy to put myself in his shoes.

Almost 30 years ago, one summer night a little after midnight, I was driving from Inglewood, California, passing through South Central LA, heading back to my apartment in the northern part of Los Angeles. As I turned onto, ironically, Martin Luther King Blvd, I heard a police siren and noticed flashing lights pulling up quickly behind me. I pulled over, fully expecting the police car to pass me, but the car actually pulled up behind me. The scene that followed has remained seared in my memory like it was happening just yesterday. The police shouted through a bull horn for me, and a friend who was with me, to get out of the car with both hands so they could see them. I was 31 years old, and this was the first time I had ever been stopped by the police. It turned out that there were several police cars and at least 6 officers who surrounded me and my friend. They turned both of us around, began forcefully frisking us. I remember one officer asking me why I was so nervous. I told him that it was because I had never been stopped by the police before.

Next, the police had my friend and I kneel on the ground and up against a chain link fence. We stayed in that position probably only minutes, but it seemed like an eternity. Unable to see what was happening in the dark behind us, the anxiety I felt was the most chilling feeling I had ever felt before or since. Finally, an officer returned from one of the police cars, pulled us up and handed me my driver’s license back. He said that a stolen car fitting my car’s description was reported, but it was not my car and we were free to go. I was driving an old, metallic blue Chevette I had bought from a used car auction. I was pretty sure there were no cars fitting that bucket of a car’s description. I was also certain that we had been stopped for the cardinal sin of driving while Black through a community that routinely experienced unwarranted stop and frisk tactics in the early 1990s.

I’ve never gotten over the feeling that a bad night could have gone even worse if we had made one false move, or we had been stopped by the police officers from the infamous Rodney King case, Stacey Koon, Laurence Powell and Timothy Wind, or a Derrick Chauvin, who killed George Floyd. I did drive away from that incident physically unharmed, but 30 years later I am very much in touch with the psychological scars from that night, layered over even more scars vicariously experienced from the murders of Black men and women unarmed, often completely innocent of any crime, at the hands of white police officers.

So I’ve spent these weeks in a kind of trauma induced trance, unable to articulate what I was feeling. But today, I’m here to say that what I’m feeling is anger and outrage. I want justice for George Floyd who was murdered by the knees of Derek Chauvin in his neck, but just as much I want racial, social, and economic justice for all Black Americans who, for over 400 years, have century after century lived lives with the foot of racial oppression at the base of their necks.

And, that racial and economic justice needs to start right here in Washington, DC, and begin with the DC government removing its foot of oppression from the necks of its Black and brown residents. The DC Mayor and City Council have to be forced to do more than present its people with a budget that “treats everybody fair” – as the Mayor describes it. We need a budget that treats Black people like their lives matter enough to pay for and build the housing tens of thousands need, that provides cash assistance that really starts to deal with the oppressive income disparity seeming to grow unchecked. We need a budget that calls for the first pledge to end socio- economic apartheid in DC. And we need it now.

My pledge at Bread for the City is to double down on our quest to be an anti-racist organization, relentlessly supporting community members seeking to use their power to bring about justice in their neighborhoods, and to honor this work through our investment in Southeast DC as we set to open a new facility to continuing and deepen our work addressing racial, economic, and social justice in Washington, DC.

To the Black community especially, I also say, please take care of yourselves and each other. It’s OK to not be OK. It’s OK to sit in your feelings. To be in a trance like mine. To spring into whatever action you feel is proportionate against the actions and systems in place taking our lives. However you’re reacting, I support you. And to our white colleagues and allies, many of you who are upset by the recent events, I need you to understand your Black neighbors, co-workers, and friends are not OK right now. And that’s OK.

George A. Jones is the CEO of Bread for the City, a mission-driven direct services organization in Washington, DC. He was honored as the 2019 Cornelius R. “Neil” Alexander Humanitarian Award recipient by the DC Office of Human Rights. He is a tireless advocate for ending poverty in Washington, DC.

George,
Thank you for bringing the courage to speak of your own heart, of reaching into your soul despite past traumas. And further thanks for shedding light on DC’s budget deficiencies and laying out what DC must do to bring justice for all who live here.

To my dear friend George Jones! This was an interesting story to read. I hope and pray that you remain strong, and continue leading us in the fight to end poverty in Washington DC.

This is so full of PAIN, but also POWER. George Jones, we love you, and DCPCA will work by BFTC’s side to do all we can to end the socio-economic apartheid that is prematurely ending black lives.