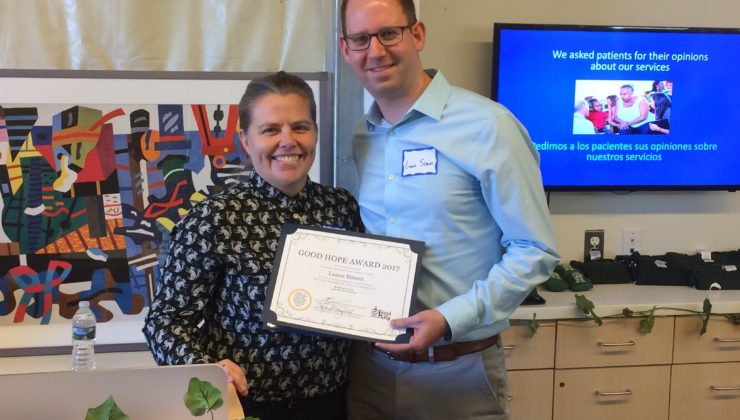 Lance Simon had always been familiar with Bread for the City’s important work in D.C. So, when he received legal training in representing survivors of domestic violence, he was eager to put this newly acquired knowledge to work. Through the DOJ Pro Bono Program in his capacity as a Bureau of Alcohol, Tobacco, Firearms, and Explosives (ATF) attorney for the U.S. Department of Justice (DOJ), he became involved as a volunteer with BFC. “Laura Klein, DOJ Pro Bono Program Manager, connected me with Bread for that purpose,” he remembers.

Simon has represented several survivors of domestic violence in D.C. Superior Court.  In each of those cases, his clients received the civil protection orders they were seeking.  And in one case, he continued to represent a client in a protracted child custody dispute over the course of approximately nine months. In addition, he has also staffed the DC Bar Advocacy & Justice Clinic—hosted at Bread for the City’s Southeast location—annually over the past two years now.

Although juggling a full-time job as a litigating attorney with the demands of pro bono representation, including client meetings and court appearances, is not easy at times, Simon values the opportunity to represent members of his own community through his pro bono work at BFC. “Getting my clients the important relief they are seeking during some of the most challenging times in their lives is worth the effort”.

For Simon, Bread for the City is an excellent organization for attorneys new to pro bono work. “In each of my cases, I was mentored by talented staff attorneys (Tracy Davis and Allison Miles-Lee) who were responsive to all of my questions and guided me along to ensure I had the resources necessary to succeed in my representation.”

He encourages people to become a Bread for the City volunteer and advises newcomers not to worry if they are not an expert in domestic violence, family, landlord-tenant, or any other particular area of the law in which there are pro bono opportunities. “Just bring a willingness to learn and know that you will be supported by Bread throughout.”

Thank you for your service, Lance!

Bread for the City’s legal work is made possible in part through funds awarded by the DC Bar Foundation.