Need for Survivor-Centered, Trauma-Informed Housing Services for DV Survivors in the District of Columbia - Bread for the City 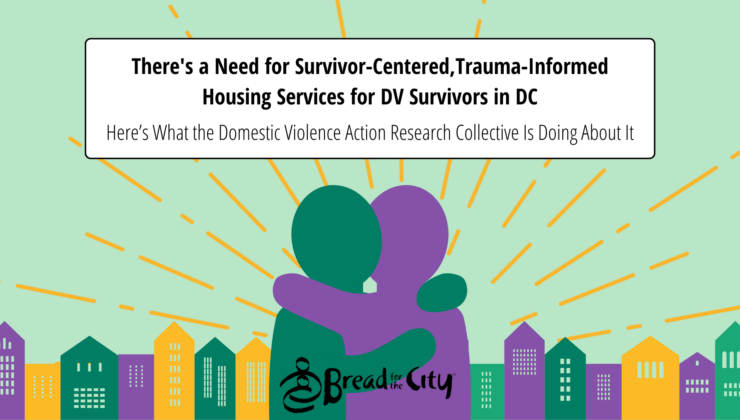 In 1948, the United Nations General Assembly adopted the Universal Declaration of Human Rights, recognizing, inter alia, the right of all persons to safe and affordable housing. The inclusion of housing as a human right correctly centered housing as necessary for several other fundamental facets of life: physical and mental health, access to education, attainment of economic stability, and overall well-being. And yet, despite housing’s primacy in the lives of every individual, marginalized groups, including survivors of domestic violence, continue to disproportionately struggle with housing instability and long-term homelessness in D.C., as compared to their non-marginalized counterparts.

The 2021 Point in Time (PIT) count, coordinated by The Community Partnership for the Prevention of Homelessness, found 5,111 unhoused individuals and families in D.C. on the date of the count. The PIT data is crucial for understanding the scope of housing instability throughout the District, and includes numerical data on unsheltered families and individuals, disaggregated by ward, age, disability/dual diagnosis, race/ethnicity, sex, and LGBTQIA+. The data suggest that since the Homeward D.C. plan was adopted by the city in 2016, the rate of homelessness among families has decreased. However, during the same timeframe, that rate has increased for unaccompanied individuals. Together, these data underscore the need for a sustained commitment by the city to address both chronic and emergent homelessness. Bread for the City has long advocated for D.C. to invest in truly affordable housing. To realize our vision of a poverty-free and racially-equitable D.C., the District must make progress toward ensuring that safe, stable, and affordable housing is a right for all District residents, particularly those most vulnerable to homelessness, whether due to race/ethnicity, age, mental or physical health or disability, or experience of family or community violence.

One of the most significant root causes of housing instability for adults and families is exposure to domestic/family violence in the home: 44 percent of homeless adults with families in D.C. have reported a prior history of domestic/family violence, and 42 percent cite it as the primary cause of their lack of housing. These figures are consistent with research from other jurisdictions demonstrating the intersection between homelessness and domestic violence. Here in D.C., although progress has been made toward alleviating family housing instability, survivors of domestic and violence continue to face significant challenges, as the experience of intimate partner violence is closely intertwined with housing instability. Survivors of domestic violence report compromised physical and psychological well-being, ruptured social networks, and interferences with routine activities such as work and school, all of which undermine long-term housing stability and negatively affect the well-being of survivors and their children.

To gain insight into the nature of the challenges facing survivors, in 2018 the Domestic Violence Action Research Collective (DVARC), a collective of domestic violence advocates, practitioners, attorneys, and researchers, launched a qualitative study seeking to understand the experience of survivors of domestic violence (DV) in accessing housing resources at the Virginia Williams Family Resource Center (VW), D.C.’s central point of intake for families experiencing housing instability.

We screened 779 families who sought services at VW between May 2018 and May 2019. This initial screening consisted of a single question, designed to identify those whose homelessness was linked to DV. Of the 183 individuals who disclosed that DV was the cause of their homelessness, 41 completed an interview.

Of the survivors interviewed, the average age was 29, all but one identified as female, and 95 percent identified as Black, five percent as Latina. Fifteen percent of participants disclosed concerns about their physical health, and 38 percent about their mental health. While DV was the underlying cause of their immediate homelessness, many expressed that they also encountered difficulty in finding permanent housing because of poor credit checks, past evictions, income requirements, and/or a past criminal history. For some participants, those additional barriers may have been the result of past experiences of intimate partner violence.

The interviews with survivors were illuminating, underscoring the challenges inherent in a housing system that does not have the resources to meet their needs, and the frustrations created by a system that frequently prioritizes efficiency and resource scarcity over survivor safety, autonomy, and privacy. For example, despite provisions in D.C. law designed to make access to shelter housing readily available following an incident of domestic violence, study participants in precisely this situation routinely described being asked to provide exhaustive documentation of past addresses and living situations. One respondent, Cheryl (pseudonym), explained: “I feel like some of those questions on the intake sheet and Virginia Williams [were] either too much or they’re not explaining it clear enough… I can’t remember an address that I had in [another state] three years ago. … [B]eing in that abusive relationship, like some of my memory went away, because I used to get kicked in my head a lot… So like some [things]… I don’t remember. … I don’t understand why your last address can’t be good enough. If you’re homeless, you don’t have no address.”

Survivors reported that some VW staff called family and friends of the survivor—without her permission or knowledge—to ask whether they could offer the survivor a place to stay. This practice not only directly undermined survivor safety and autonomy, but also resulted in the denial of housing assistance to many participants, based on unsafe and otherwise problematic arrangements made without their participation.

Survivors also experienced a lack of transparency and a confusing process for seeking housing assistance at VW. Survivors were unable to predict nor provided information about the length of time an appointment or visit to VW would take, the precise documentation required, or the types of housing assistance that might be available. As Sheila (pseudonym) described: “[DHS staff at VW] were helpful. But as far as like the procedure or the way they have things set up, it’s a little all over the place. Because, you don’t know where you’re supposed to go if you do have an appointment, or if you don’t have an appointment, or if you’re just walking in, or you know what I’m saying?” In practice, the lack of a clear process forced survivors to return to VW two, three, or four times, with wait times ranging from 10 minutes to five hours, simply to find out whether they were eligible for services. Additionally, survivors described not having any clear indication as to what potential options were available to them for either short- or long-term housing.

Several participants also identified that VW staff subjected them to personal bias and stereotyping that affected not only how they felt in disclosing the reality of their housing situation and their past DV experience, but also made them question whether VW was truly designed to help them meet their housing needs. Anika (pseudonym) confided, “I believe they’re just like, you know, another Black girl with kids coming here looking to… I don’t know if that’s what they were thinking, but of course, [it’s] the majority African American coming there with kids that need the help. And I think some of the people that do work there stereotype the people as wanting to just live off of Virginia Williams and coming in here with the wrong impression about what they help for. So I think that’s why [staff] may come off the way they do.” Inherent in Anika’s disclosure is the possibility that racial bias and assumptions made by VW staff reduced the likelihood that a survivor would receive services. In the DVARC study sample, 95 percent of participants were Black, and in the PIT study, 85 percent of adults experiencing homelessness in the District were Black. Any denial of services based on racial bias reinforces the racial disparity in access to affordable and safe housing throughout D.C.

Perhaps most telling is the bottom line: What were the outcomes for the 41 study participants who came to VW and disclosed DV as the primary reason for their homelessness? Only four of the 41 were placed in immediate housing/shelter. Nine were referred into the District’s Rapid Rehousing program. Nine additional participants were not given housing resources, but instead were provided referrals to other services not focused on housing. Nineteen survivors, or 46 percent, were deemed “ineligible” for VW housing resources. And yet, each of these families came into VW seeking housing assistance because violence in their homes made it unsafe for them to remain housed, and left VW with no alternative to the abusive situations from which they had fled. In reality, many of these challenges in obtaining long-term housing assistance arise from a woefully inadequate supply of emergency, short-term, and long-term affordable housing options. For instance, as of July 1, 2021, the Domestic Violence Housing Continuum (DVHC), an interagency partnership aimed at eliminating barriers for survivors seeking housing, had a total of 297 units for survivors of DV; only 13 were available for survivors fleeing immediate danger. The lack of safe housing options available in the District directly contributes to continued instability, danger, and ill-health for survivors, and undermines the well-being of families throughout the city.

DVARC’s primary goal in undertaking the Survivor Housing Access Study was to promote survivor voices, allowing them to articulate the significant challenges they face and to make recommendations to stakeholders within D.C.’s housing system. Our analysis of survivor responses led DVARC researchers to make a series of survivor-based recommendations to VW – and a broader audience of District policymakers – regarding how to improve service delivery so that it is both survivor-centered and trauma-informed. Our recommendations also provide a framework for responding to the District’s housing crisis that is grounded in racial equity and based on the premise that there is a fundamental right to housing for all people. Our recommendations focus on the interpersonal behaviors, structural policies and procedures, and cultural norms that contribute to racial disparities in housing; they are designed to assist the District in creating conditions where all individuals are equally likely to meet their basic needs, access justice, have their rights respected, and see their life valued by fellow citizens.

The full report, comprising four separate papers, is available at the DVARC website.