Supervising Attorney Esther Adetunji: Changing the World One Housing Case at a Time - Bread for the City 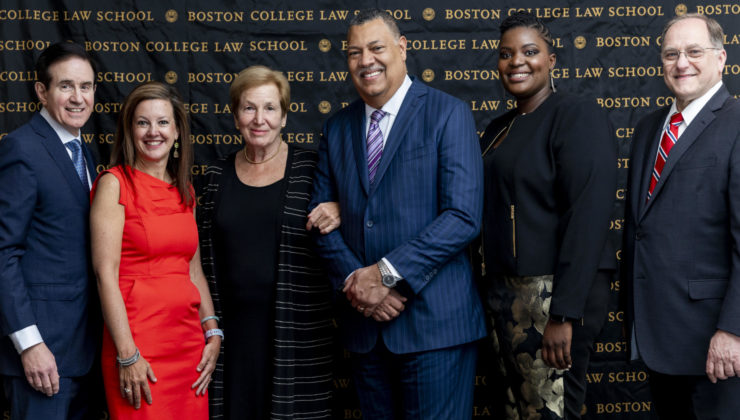 Supervising Attorney Esther Adetunji: Changing the World One Housing Case at a Time

The dictionary defines “constant” as “occurring continuously over a period of time” and “a situation or state of affairs that does not change.”

For Bread for the City’s housing practice, supervising attorney Esther Adetunji is the constant.

“She’s so solid in everything she does,” Supervising Attorney Rebecca Lindhurst said. “She’s not excitable. She compares herself to a duck, she’s floating on top of the water, but underneath her feet are going a million miles an hour.”

Adetunji arrived on the campus of Boston College Law School in 2008 with a clear mission: change the world. “I didn’t fully understand what it meant then,” she says, looking back. “[But] I realized it’s wasn’t naïve or impossible.”

An internship during law school provided an introduction to housing legal work. With a foundation laid, it was a career services advisor that introduced Adetunji to Bread for the City. She knew immediately it’d be a fit.

“One of the requirements was having a sense of humor,” she says of the job ad. “My advisor told me told me, ‘This is very much you.’ It was different from everything I’d seen – It was serious and light-hearted. It sounded like me. That made me feel comfortable just knowing there was a place out there like this. It felt like it was meant to be.”

As Adetunji would soon learn, changing the world requires staring down, and fighting against, unfathomable degrees of cruelty in the form of landlords’ treatment of tenants. Her first case involved a disabled client whose apartment experienced significant water damage due to a broken pipe.

“Her kitchen flooded… and no one came. My client’s sister was the one who dumped the water out of the unit. As a result of the water damage, the wooden floors became warped and uneven.”

Adetunji’s client was unable to return to her unit. Making matters worse, the landlord made no effort to fix the damage.

“The landlord did fix the ceiling in the unit below. They claimed not to know the extent of the damage to my client’s unit. We went to trial. She ended up getting way more than we imagined. I don’t remember the number, but she walked away not owing anything to the landlord.”

Adetunji has been quietly collecting victories on behalf of clients in the years since. And while she does her best to fly under the radar, her alma mater recognized her advocacy efforts at last month at its annual Law Day program, where she received the Recent Graduate Award for her courage and commitment to the ideals of Boston College Law School.

“Esther doesn’t want accolades or the spotlight,” Lindhurst said. “She’s behind the scenes doing the hard work. She got this award and probably wouldn’t have told anyone about it if someone hadn’t overheard a conversation.”

Nearly eight years out of law school, Adetunji found her path to changing the world through housing law. She views her role as one of both advocate and teacher for clients.

“It still outrages me that people treat our clients the way they do,” she says of landlords or D.C. Housing Authority. “We’re going to teach them a lesson that it’s not okay to do that. We also want to teach the clients that if something happens, it’s not okay and they should always fight.”

On the legislative front, she believes an infusion of empathy would go a long way towards making the District more affordable.

“If we’re able to humanize our neighbors and the person on the streets or the people in shelters, it’d be very difficult for voters or the Council to say, ‘No, I don’t want to fund affordable housing,’ or ‘I don’t want to hold that contractor accountable.’

“We don’t see people as equals and that’s why people can’t say ‘No, that’s not right.’ The moment we do that is the moment we can make legislation for everyone.”

Esther’s work at Bread for the City is funded in large part by the DC Bar Foundation’s Access to Justice program.
Share: