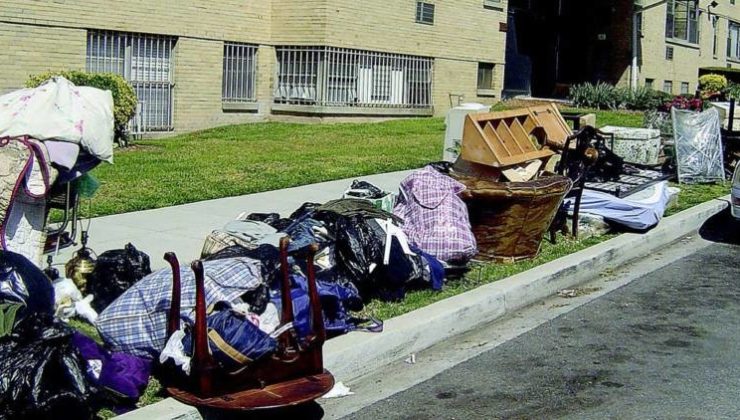 Yesterday, managing attorney Rebecca Lindhurst testified against the Eviction With Dignity Act. As Rebecca noted here, the bill does not go far enough to protect tenants from losing their personal property after an eviction. This testimony also recommends several fixes to the legislation that we urge the Council to adopt.

Good Morning. My name is Rebecca Lindhurst and I am a managing attorney at Bread for the City’s Legal Clinic[1]and a resident of Ward 6. I submit this testimony regarding Bill 22-0809, the Eviction with Dignity Act of 2018.  The bill, introduced in the wake of the U.S. Marshals Services’ announcement of changes to the eviction process, is intended to address a pressing concern: the need to protect the possessions of District residents who are evicted from their homes.  I will also use this testimony to express our support for improvements to this bill, as well as Bill 22-0895, the Eviction Procedure Reform Emergency Amendment Act of 2018, which the Council passed in July.[2]

It’s no secret that our city is divided. The District’s severely cost burdened, extremely low-income renters are overwhelmingly people of color[3], and as the city becomes wealthier and younger, longtime Black residents continue to be pushed out. Today, Wards 4, 5, 7 and 8 house the majority of black residents in our city.[4]While all of this may seem a little dramatic and off topic, I frame my testimony this way because it is the residents who make up these statistics who are most likely to end up in the Landlord Tenant Division of the D.C. Superior Court. [5]

Some of you saw the workings of the Court up close on a recent tour. Up to 250 cases are heard in that court each day. Cases of tenants like my client Mr. Smith who recently lost his apartment of 15 years, where he raised his daughter as a single dad and sent her off to college just last summer. When Mr. Smith moved in to his apartment the rent was $600. Despite living in a building designated as “affordable” over the years the rent increased and in 2018 the rent was $963[6]. For 12 of those 15 years in his apartment, Mr. Smith was on a kidney transplant list. When he got a new kidney in 2015, his health improved but his housing situation became precarious. The rent got too high and he could no longer made ends meet with his SSI check of $750 and a few hours a week working at a grocery store. Mr. Smith put his name on the DC Housing Authority waiting list but waits along with the other 40,000 families on the list. So now he is homeless. He’s lost all of his possessions, the entire contents of his life are gone.

Mr. Brown is like the hundreds of tenants we meet each year. They are the reason we so adamantly want to provide the small comfort of storage of a tenant’s possession when they are evicted.

We propose that the permanent legislation include the following:

We believe that 14 days is insufficient and suggest that the permanent legislation extend the notice period. We agree that the new system, which gives tenants a date certain for an eviction is an improvement over the prior system. However, the expedited process may mean that moreevictions take place under the new system. Under the new system, the US Marshal Service only oversees the changing of the locks, rather than the complete eviction of the household, which means more evictions can happen each day. Under the old system, evictions rarely happened within 14 days and more often than not took months to execute. With the new timing, tenants have less time to identify new housing that they can afford or a location to store their possessions – something that was already difficult due to our affordable housing crisis.

Given the quick turn around under the new system, tenants are unlikely to be able to access critical services in just 14 days. For instance, many Emergency Rental Assistance Program (ERAP) providers prioritize tenants with a Writ of Restitution in giving appointments for assistance. Other tenants without a Writ struggle to get appointments, having to call in for a very few appointment slots available just one or two days a month.

Further, a typical ERAP processing time is much more than 14 days, often taking up to a month to process. Take the example of Ms. R, who applied for ERAP on August 6thand under the new US Marshal Service process was scheduled for eviction on August 24th. On the 24thMs. R went to the court to ask for a stay of her eviction given the delay in processing her ERAP payment. The Court in that instance used its discretion and granted a stay until August 31stbut not all tenants are guaranteed a stay under those circumstances. As you may know, the judges in the Landlord Tenant Division rotate and not all judges would have ruled the same way and are have no obligation under the law to give a tenant more time to access ERAP.

As any of us who has moved can acknowledge, making arrangements to move is not an easy task. Now consider that you have limited means to secure storage, a vehicle to move and have no where to go. Giving a tenant just 14 days notice and then on the day that they are actually moving their possessions only giving them 8 hours in a one block period of time makes it especially challenging.  Further, consider that you can only move during business hours because your landlord only allows access to your possessions during that time. The law as passed is unflexible and unworkable for those dealing with an eviction crises.

We believe that any permanent legislation should include a public storage provision. Recognizing that such an option could be cost prohibitive for non-profit and small landlords, we also propose that these landlords have access to a fund that can be used for moving and storage free of charge. Our suggestion is that after an initial 7 day period of on site storage, a tenant should be able to elect to have their possessions moved to off site storage for a period of 30 days. After the initial period of pre-paid off-site storage, we recommend that an evicted tenant have the option to assume, at a reasonable monthly cost, the expense of storage for however long it takes them to secure stable housing or make alternative arrangements.  While this will be a challenge for many low-income tenants, it would give them a further option to keep their belongings safe while they continue to search for housing.

The emergency law passed in July requires the landlord to provide the tenant with notice of the eviction 14 days prior to the date of the eviction. It also specifies elements that must be included in the notice and appropriate methods of service.  The permanent legislation, should reconsider the notice provisions for several reasons.

First, under the current legislation, the notice does not require the landlord to inform tenants that they have the right to collect their belongings. There is also no requirement that the landlord provide information about how to schedule an opportunity to access their possessions. Without that information, tenants may be not understand that they have the right to get their possessions before they are deemed abandoned. The permanent legislation’s notice requirements need to be as clear as possible about what tenants’ rights are. A lack of clarity will only lead to more confusion for tenants.

Further, the permanent legislation needs to be explicit that the failure to serve a complete notice at least 14 days prior to eviction is cause for delaying the eviction until such notice is served. The legislation should also provide that any eviction carried out in the absence of a legally sufficient notice is unlawful, and should set forth an enforcement mechanism and remedy for tenants whose rights have been violated.

Finally, with regard to the notice provided to tenants, there is no requirement that tenants be provided updated information about eviction date in the event that the date is rescheduled for any reason. The notice requirement is rendered meaningless if it is not consistently applied to all eviction dates, including those that have been rescheduled due to landlord request, inclement weather, or US Marshal unavailability. These are relatively simple fixes to the emergency law’s procedures, but provide meaningful information to tenants who are faced with eviction.

Thank you for the opportunity to testify. We look forward to working with the council to ensure that the catastrophic effect of an eviction is lessened through this legislation.