Yesterday we breathed, today we continue the fight for real Justice - Bread for the City 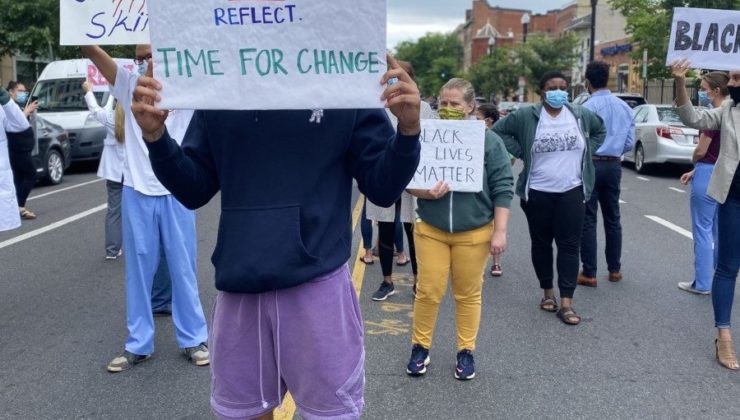 Yesterday we breathed, today we continue the fight for real Justice

The murder trial of Derek Chauvin ended yesterday with an appropriate yet atypical measure of accountability: guilty on all counts. Still, justice is far from done. George Floyd, whose life was taken over a $20 bill, is still gone, and in the weeks leading up to today’s verdict, the murders of many others including Daunte Wright, Adam Toledo, and in the DC area, James Johnson and Dominique Williams were all committed by police officers.

We at Bread for the City recognize that a guilty verdict, in a country that will likely produce more violence against Black and brown people over the coming weeks and months, stands as a victory with immense cost. The work of social and racial justice must continue, and we stand with the people and organizations who are fighting to end state-sanctioned oppression, violence, and the murder of Black, brown, and other people of color across the country.

Bread for the City calls for the District of Columbia government to declare our city an anti-racist city. This means that our leaders in government will intentionally and proactively advance the interests of BIPOC residents. Finding police officers guilty of murder in cases like George Floyd’s is the minimum that can be done. The verdict provided accountability, for true justice, we must dismantle systemic racism. We must build a city together where Black people are safe and thriving.

Finally, Bread for the City sends our heartfelt prayers to the family of George Floyd, who have been forced to hold the weight of their own grief while fighting for accountability and justice over the past 10 months. Rest in power, George Floyd.