Your Liberation is Bound to Mine: A Reflection on My Commitment to Fighting White Supremacy - Bread for the City 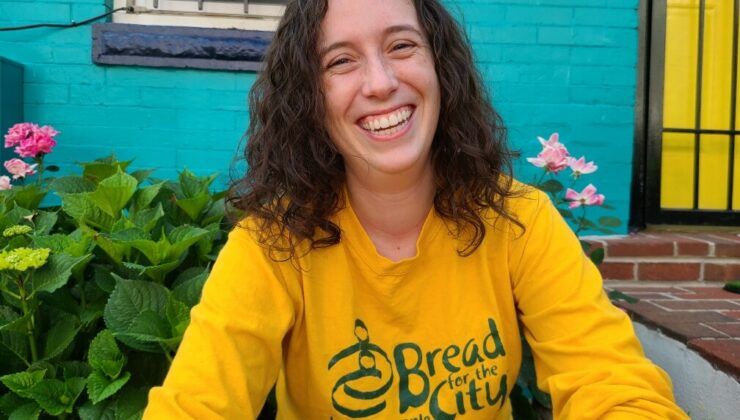 Your Liberation is Bound to Mine: A Reflection on My Commitment to Fighting White Supremacy

What I’ve learned over the past year is that antiracism and fighting white supremacy is not an intellectual endeavor. It is an embodied, healing, lifelong journey full of mistakes, love, and discomfort. As a Jewish white woman, I wrestled with how my heritage, intergenerational trauma, and internalized antisemitism were all wrapped up in white supremacy and fighting racism. I’m writing this to reflect on my own experience in hopes that more white people will join me on an antiracist journey.

A year ago I was treading water when it came to my whiteness. I kept my head above water with a basic understanding of white privilege but did not dive beneath the surface and take a true look at the harm and benefits that came from my whiteness. I had a script to talk about my whiteness and grapple with my white privilege, but it was all in my head.

Last May, I was a white woman wrapped up in my own world. I was feeling down about my birthday being in quarantine, celebrating my first wedding anniversary, and overwhelmed about the COVID-19 pandemic. Then, George Floyd was murdered. And like a lot of other white people, I felt a gut punch that I hadn’t felt before. As a white person, I get to choose when I think about race. Being blissfully unaffected or choosing when I get to think about police brutality is a key privilege of whiteness. And something cracked open inside of me that told me I couldn’t just keep treading water. It was time to get out of my head and take a look at myself underneath the surface. So I turned to a resource that was getting a lot of traction in my social justice community.

The book Me and White Supremacy by Layla Saad gave me definitions around white supremacy and a guide on how to reflect on my life’s experience as a white person. It was the extra push to journal privately and admit to myself how I contribute to white supremacy. I felt very emotionally involved in the experience, and those closest to me were starting to see a change in how I saw my justice work. I had been a longtime protest attender and petition signer but this was different. I was owning up to my harm and committing to do something different moving forward. Books and knowledge aren’t enough. You can’t book club your way out of racism. We are dealing with hundreds of years of systemic oppression, that yes you and I did not create, but we need to work on a micro and macro level towards a more just future. And that work starts in the white community. That’s where Whiteness Havruta came in.

In January 2021, I enrolled in Whiteness Havruta, a Jewish racial justice peer-supported learning intensive for white Ashkenazi-heritage Jews committed to ending racism. For those unfamiliar, Ashkenazi Jews are defined as having family lineage from central or eastern Europe. There is a lot of diversity in the Jewish world, but this group was focused on white, Ashkenazi Jews. When I got an email announcing the program, I thought “wow that’s me in a nutshell!” I have a lot (if not all) white Ashkenazi-heritage, and I was clamoring for an affinity group community around antiracism. As described in the overview of the program, a havruta is based on the Hebrew word for “friendship” and refers to learning in pairs. I was paired with Rakhel, another white Ashkenazi Jew, and off we went. I met weekly with my havruta partner and participated in webinars led by April Baskin of Joyous Justice and Catherine Bell. Through a curated program and proactive discussion we wrapped ourselves in learning about white supremacy, our historic and current role as white Jews, and what we need to do to stay on this lifelong antiracist journey.

My Whiteness Havruta experience can only be described as transformative. I learned it was critical to unpack how antisemitism is a piece of the foundation to white supremacy and I can only show up as antiracist if I’m healing from my own community’s trauma. I felt safe to make mistakes and be honest about where I was grappling with topics such as reparations, white supremacy culture, and the intersection of anti-semitisim and white supremacy. It has been a holistic and intense 5 months and I can’t wait to see where I go next.

Through all of this I have so many takeaways. Here is a summary of a few:

Is this an exhaustive list? Absolutely not. As I type this, I’m surrounded by my antiracist journal, various books, and a folder overflowing with annotated articles and notes from podcasts. I’m sitting on the shoulders of decades of work and energy done by so many people and am filled with countless takeaways.

It takes a lot of time, courage, and energy to bring these learnings into my daily personal and work life. In late 2020, I asked my dad if he would watch 13th with me, a documentary directed by Ava Duvernay about the 13th amendment and its racist history and current impact. My dad and I had an uncomfortable and passionate argument about reparations weeks before watching the documentary and I wanted to continue the conversation. I left that conversation with a strong feeling that I had more to learn, and was energized by the idea of me and my dad learning it together. I didn’t want “not knowing enough” to be a reason to turn away from the discomfort. And it wasn’t easy but sitting in two cities hundreds of miles apart we watched the movie simultaneously while chatting over instant messenger about what we were learning. He shared with me his personal perspective about how he saw a lot of what the movie discussed unfold before his eyes in the 1970s and 1980s. We both spoke freely about what we didn’t know before and how so much of this was hidden in plain sight. Neither of us had to be the expert and we both trusted the other one to be honest in our experience. I’m proud of my relationship with my dad and our ability to have racialized conversations.

This work only gets more powerful when more people are committed to being antiracist. I hope that my story inspires you to push yourself on how you can show up antiracist in your daily life. I appreciate you taking the time to read my reflections and am looking forward to being on this journey together.

Special thank you to Layla Saad, April Baskin of Joyous Justice, Catherine Bell, and my havruta partner Rakhel for your incredible wisdom, patience, and commitment to an antiracist world. You are the reason I am where I am today.