Where We Stand: Family Separation and Detention is Not a Humane Immigration Policy - Bread for the City 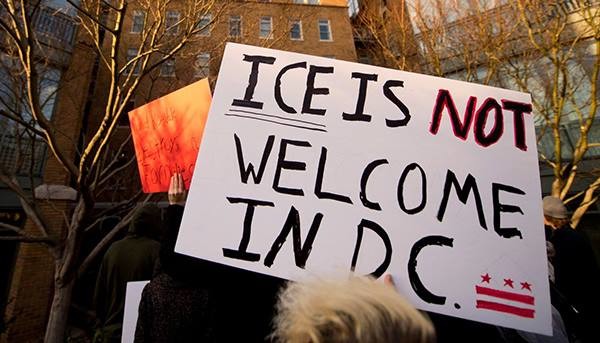 Where We Stand: Family Separation and Detention is Not a Humane Immigration Policy

Bread for the City strongly condemns the recent ICE arrests in NE D.C. and the Trump Administration’s policy decision to separate children from their families at the U.S.-Mexico border, many of whom are entering the country to lawfully seek asylum protections. Though the President issued an Executive Order, “Affording Congress an Opportunity to Address Family Separation” on June 20, 2018 that purportedly aims to stop the forced separation of children from their parents, the Executive Order returns to a failed Obama-era policy of detaining families pending immigration proceedings.

The continued, indefinite detention of immigrant families with children runs afoul of humanitarian values and child welfare and development, and further jeopardizes U.S. obligations under domestic and international law. Arriving non-citizens have a right to seek asylum, a protection from state-sanctioned persecution that they must request at a U.S. border. Detaining asylum seekers indefinitely results in detrimental consequences for all, as detained families and children experience trauma, compromised health and safety, a violation of fundamental rights, and inadequate access to legal counsel in consequential immigration proceedings. Immigration detention is motivated by profit and politics, not the well-being of immigrants nor concerns for public safety.

The Administration’s reliance on detention as a tool to deter asylum seekers and penalize those who reach U.S. borders seeking safety, and its use of children as a pawn in Washington’s immigration debate, reflect the U.S. preoccupation with detention, incarceration, and forced control of black and brown communities throughout the nation, and within the District of Columbia. The District’s ill-conceived and under-resourced plan to close D.C. General, without first guaranteeing adequate community-based housing options, compounds the challenges faced by D.C.’s homeless and housing insecure population. For too long, families have been warehoused in crowded, unsanitary shelters that neither afford homeless families with dignity nor sufficient supports to establish lasting stability. Compounding this is the inextricable link between domestic violence and homelessness. According to the DC Coalition Against Domestic Violence, more than half of women experiencing homelessness experienced violence that threatened their safety. We cannot as a community or as a city call out the dangerous, racist policies of the Trump administration without also looking at our own policies and practices and seeing the parallels.

Immigrants fleeing life-threatening violence in Central America – like homeless families in the District – are seeking protection and assistance from the U.S. government because they have no other option.  For the government to respond with family separation and indefinite family detention in warehouse-like conditions denies the inherent humanity and dignity that should be afforded all people. Whether fleeing state-sanctioned violence or trying to escape an entrenched cycle of poverty, families and children deserve respect for fundamental rights, including the maintenance of family relationships, access to health care, and the provision of basic necessities, without unjust restrictions on freedom. As a country, the United States has the resources, ingenuity, and humanity to protect asylum seekers, immigrants, and domestic homeless populations. The same can be said for the District. Bread for the City stands alongside detained immigrants and all marginalized populations in their demand for fair, just, and dignified treatment.