When We Fight, We Win: DHS Changes Food Stamps Campaign - Bread for the City 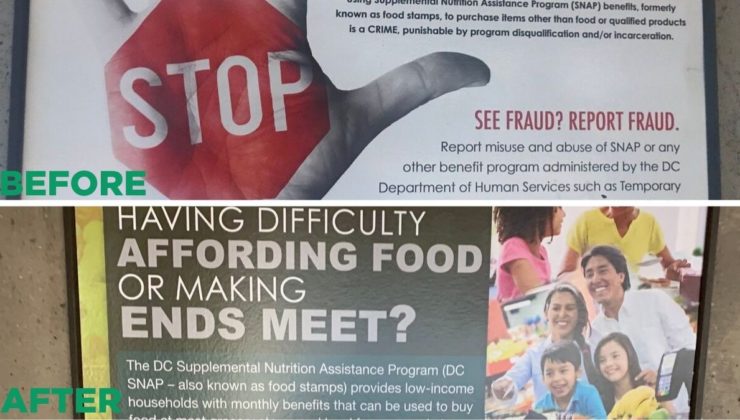 When We Fight, We Win: DHS Changes Food Stamps Campaign

We’d like to thank DHS for listening to our concerns before the rollout of their latest SNAP (commonly known as food stamps) campaign.

Some of you may remember our summer blog taking DHS to task for proposing an offensive fraud prevention campaign for SNAP. As we wrote in July, “the proposed radio ad sends a message to community members who do not receive SNAP that they need to be vigilant about policing those community members who do.” Well, our feedback was received! DHS listened to our concerns and those of other advocates and made real and substantial changes to the ad campaign.

This proposed campaign was done under the guise of education. But given that SNAP recipients are already aware of what benefits can and cannot be used for, we had to ask, who was that education for?

We also objected to the use of the term “legal immigrants” in the ad. This implies that some immigrants are “illegal.” As a sanctuary city, we should be in the business of treating all people, regardless of their immigration status, with the respect and dignity they deserve.

We raised our voices and DHS listened. Responding to community feedback, the new campaign focuses on making sure DC residents are aware that SNAP is an important resource available to them — a much more respectful and helpful message.

A special thank you to our legal team, our supporters, and everyone who advocated to make this happen.

When we fight, we win.